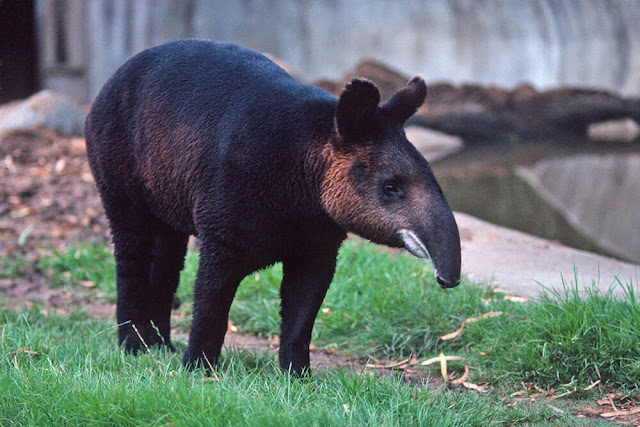 They like to spend time in the water because water cools them down and helps them in removing parasites.

A tapir is a large, herbivorous mammal, similar in shape to a pig, with a short, prehensile snout.

Tapirs can spend few minutes under the water. They can use their snouts as snorkels if they need to hide under the water longer period of time (in the case of danger).

Although pig-like in appearance, their closest existing relatives are the horses and rhinoceroses.

After 13 months of pregnancy, one calf will be born. As long as mother produces milk, young tapir will eat it.

Young tapirs have specific yellow and white stripes and spots on the reddish-brown fur which provide excellent camouflage. After few months (when they lose these marks), they look like miniature version of adult animal.

Adaptable to different habitats, tapirs may be found in swamps, forests, savanna, and rainforests.

All tapirs prefer wooded or grassy areas with places to shelter during the day and a lake, river, or pond for taking a nighttime dip.

The natural lifespan of a tapir is approximately 25 to 30 years, both in the wild and in zoos.

Tapirs communicate verbally, via high pitched sounds and non-verbally, via urine droppings. By sniffing and recognizing urine marks, tapirs can know if there are other tapirs in the area.

The kabomani tapir (Tapirus kabomani) is the smallest species of tapir; it is roughly 130 centimeters (51 inches) long; 90 centimeters (35 inches) in shoulder height; and weight about 110 kilograms (240 pounds).

Group of tapirs is called a "candle".

Their coats are short and range in color from reddish-brown, to grey, to nearly black, with the notable exceptions of the Malayan tapir, which has a white, saddle-shaped marking on its back, and the mountain tapir, which has longer, woolly fur.

All tapirs have oval, white-tipped ears, rounded, protruding rumps with stubby tails, and splayed, hooved toes, with four toes on the front feet and three on the hind feet, which help them to walk on muddy and soft ground.

Their snout is a fusion of nose and upper lip. It facilitates eating. Tapirs use it to grab leaves from the nearby branches, pick up the fruit from the ground or to find aquatic plant on the bottom of the water.

The tapir’s nose and upper lip combine into a flexible snout like an elephant’s trunk. They use it to grab leaves from the nearby branches, pick up the fruit from the ground or to find aquatic plant on the bottom of the water.

When frightened, tapirs can take to the water and breathe with their snout poked above the surface like a snorkel.

The snout also adds an air of mystery to the tapir—at first glance, it’s hard to tell just what this creature is!

These animals are ecologically very important because they disperse seeds with their feces as they move from one location to another.

Tapirs are surprisingly nimble and are excellent at scrambling up steep riverbanks. They can also run and swim. It is thought they walk along river bottoms, much like hippos do.

Tapirs can run fairly quickly with the top speed of 48 kilometers (30 miles) per hour.

Tapirs are herbivorous. They eat leaves and fruit twice a day.

Tapirs are known to eat up to 34 kilograms (75 pounds) of food per day.

Their diet gives them an important role in the ecology of their forest home: seeds passing through their digestive tract help reseed for a new generation of plants.

The tapir has an excellent sense of smell and hearing, but does not have very good sight.

Tapirs are nocturnal and crepuscular animals except the Mountain Tapir which is more diurnal, active during the day.

Tapirs have not changed much for tens of millions of years.

After a gestation period of 13 months, the female tapir gives birth to a single tapir baby (twins are rare), called a calf.

The calf’s eyes are open, and it can stand one or two hours after birth.

Even though there are differences in habitat and geography, all tapir calves look like brown- and beige-striped watermelons on legs. The pattern is good for camouflage, but they lose the stripes as they get older.

Closest relatives of tapirs are horses and rhinos.

Young tapirs nurse as long as the mother provides milk or until she is ready to have another offspring.

Calves reach full size in about 18 months but are considered mature at 2 to 4 years.

Adult tapirs are large enough to have few natural predators, and the thick skin on the backs of their necks helps to protect them from threats such as jaguars, pumas, crocodiles, anacondas, and tigers.

The four species that have been evaluated (the Brazilian, Malayan, Baird’s and mountain tapir) are all classified as endangered or vulnerable.

Tapirs are among the most primitive large mammals in the world today. They’ve been around for 20 million years and have changed very little.

Tapirs weigh from 500-700 pounds and can reach 29-42 height at shoulders. Malayan tapir is the largest and Mountain tapir is the smallest species.

The first fossil record of tapirs is found from the Early Oligocene period (65.5 million to 23 million years ago). Fossils of tapir ancestors have been found on every continent except Antarctica. Tapirs even lived in Southern California about 10,000 years ago.

In Indonesia, the word “badak” refers to both rhinos and tapirs.

In Thailand, “P’som-sett” is the name for tapir and it means “mixture is finished.” This refers to the belief that the tapir was created from leftover parts of other animals.

In Chinese, Korean and Japanese, the tapir is named after a beast from Chinese mythology, known in Japanese mythology as the Baku (spirit).

In the prehistoric sequences of the science fiction film 2001: A Space Odyssey, tapirs appear alongside primitive hominids in Africa.

World Tapir Day is held each year on 27 April.
Share This