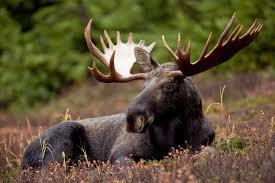 Moose are best known for their antlers. Male moose have antlers from early spring to late autumn. Antlers will drop off before winter, but next year male moose will develop even bigger antlers. They are the fastest growing organ in moose.

The moose is the largest species in the deer family.

Antlers are heavy and large. They weigh 50-60 pound and grow up to 6 feet in the width. Largest measured pair of antlers had 7 feet in width.

Main purpose of antlers is to attract females and to defeat other males during fight for their affection.

Their habitats include boreal and mixed-deciduous forests in temperate and sub-arctic climates.

Males are solitary animals and they gather only during mating season.

Pregnancy in females lasts 8 months and it ends with one or two calves. They stay with their mother until next year, when new calves will be born.

Mothers are very protective and they use their large hooves to generate powerful kick which can defeat predators.

They are also fast runners; moose can run 35 miles per hour.

Their main predators are wolves, grizzly and black bears. They will attack young moose whenever they can.

Moose have long faces and muzzles that dangle over their chins.

Most moose have a pendant of fur-covered skin, about 30 centimeters (12 inches) long, called a bell, hanging from the throat.

Their fur is generally brown or black and provides excellent insulation from the cold.

Moose hair is hollow, which helps keep it warm.

The male moose have antlers like other members of the deer family. These can grow up to 1.8 meters (5.9 feet) wide from tip to tip.

Moose are excellent swimmers. They can swim 6 miles per hour without a break for 2 hours.

Bull moose use dominant displays of antlers to discourage competition and will spar or fight rivals. After the mating season males drop their antlers to conserve energy for the winter. A new set of antlers will then regrow in the spring.

The moose is a herbivore and is capable of consuming many types of plant or fruit.

Moose are not grazing animals but browsers (concentrate selectors).

Moose have poor eyesight, but they have excellent sense of smell and hearing.

Moose have four-chambered stomachs, as do cows. They regurgitate partially digested food and “chew their cud”. Food is fermented in the first chamber, and nutrients are extracted in the next three.

Unlike most hooved, domesticated animals, moose cannot digest hay, and feeding it to a moose can be fatal. The moose’s varied and complex diet is typically expensive for humans to provide, and free-range moose require a lot of forested acreage for sustainable survival, which is one of the main reasons moose have never been widely domesticated.

Moose are excellent swimmers and are known to wade into water to eat aquatic plants both at and below the surface.

They have 32 teeth in total. Their front teeth are missing.

Moose are at home in the water despite their staggering bulk. They have been seen paddling several miles at a time, and will even submerge completely, staying under for 30 seconds or more.

Due to their large size, they need to eat a lot of food. Their stomachs may hold up to 112 pounds of food at one time.

The hump on a moose back is actually caused by massive shoulder muscles.

Their front legs are longer than their back legs, making it easier for them to jump over things lying in its path.

A moose’s wide hooves act like built-in snowshoes, helping the moose walk in the snow.

Moose have poor eyesight, but they have excellent sense of hearing and smell.

Moose are herbivores (plant-eaters) and they like to eat flowering plants, shrubs, leaves and small branches of the trees. During the summer, they eat plants from the river, like pondweed and pond lilies.

Unlike most other deer species, moose are solitary animals and do not form herds.

Mating occurs in September and October. The males are polygamous and will seek several females to breed with.

After a gestation period of 8 months, females give birth to one baby (twins are rare), which is called a calf. These calves grow quickly and can outrun a person by the time they are just five days old. The young will stay with the mother until just before the next young are born.

Males and females have the same height (around 4-6 feet at shoulders), but different weight. Males are heavier and they can reach 950 pounds, while females weigh up to 750 pounds.

A full-grown moose has few enemies except Siberian tigers which regularly prey on adult moose, but a pack of gray wolves can still pose a threat, especially to females with calves. Bears are also known to prey on moose of various sizes and are the only predator besides the wolf to attack moose both in Eurasia and North America.

In Europe the moose is known as the elk.

European rock drawings and cave paintings reveal that moose have been hunted since the Stone Age.

Moose are hunted as a game species in many of the countries where they are found.

Moose are not currently threatened, despite being hunted.

Moose are not usually aggressive towards humans, but can be provoked or frightened to behave with aggression. In terms of raw numbers, they attack more people than bears and wolves combined, but usually with only minor consequences. In the Americas, moose injure more people than any other wild mammal, and worldwide, only hippopotamuses injure more.
Share This