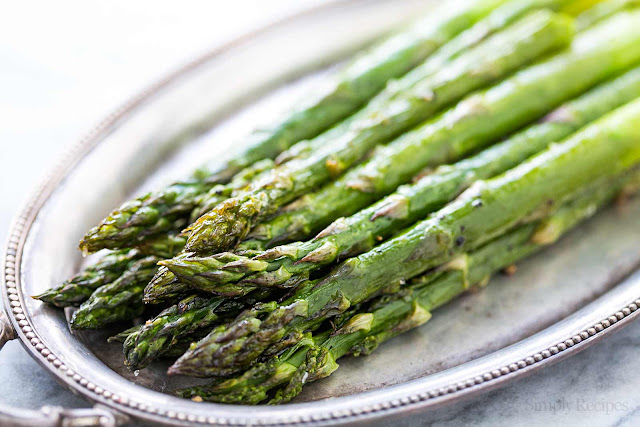 Asparagus is a spring vegetable, a flowering perennial plant species in the genus Asparagus.

Asparagus was very popular in the ancient Egypt. Bunch of asparagus can be seen on the walls of many tombs.

A distant cousin of the onion, the distinguished asparagus is also a member of the lilaceae family.

Fastest Roman athletes were carrying asparagus toward the Alps (to preserve it in the cold temperatures) while another, "asparagus fleet", was responsible to bring best-quality asparagus to Rome.

Its history goes back as far as that of the leek and has been consumed for over 2000 years.

Asparagus was the favorite type of food of King Louis XIV. Frenchmen started to cultivate asparagus in the greenhouse to ensure year-round stashes of this vegetable.

This garden plant originated in the eastern Mediterranean countries and traces of wild varieties have been discovered in Africa.

Asparagus was used as laxative and in treatment of toothache and poor eyesight in the past. It contains substances that can alleviate symptoms of the migraine, PMS and hangover.

After removal of the woody end of asparagus, spears can be boiled, microwaved, cooked, fried, marinated or pickled.

Asparagus has aphrodisiac properties due to high level of vitamin E which is essential for the synthesis of sex hormones.

Today, the plant grows in central and southern Europe, the Middle East, western Siberia, and northern Africa and is also cultivated worldwide, often in home gardens.

Asparagus is perennial plant. First harvest takes place 3 years after planting. Asparagus produces spears until the age of 15 to 20 years.

Asparagus is a herbaceous, perennial plant growing to 100–150 cm (39–59 in) tall, with stout stems with much-branched, feathery foliage.

Asparagus is rich source of dietary fibers, vitamins C, B2, B9, K and E and minerals such as iron, manganese, phosphorus and potassium.

Fruit of asparagus is small red berry. Unlike spears, berry is poisonous for humans.

The flowers are bell-shaped, greenish-white to yellowish, 4.5–6.5 mm (0.18–0.26 in) long, with six tepals partially fused together at the base; they are produced singly or in clusters of two or three in the junctions of the branchlets. It is usually dioecious, with male and female flowers on separate plants, but sometimes hermaphrodite flowers are found.

Unharvested spears produce bell-shaped, greenish-white or yellow flowers. Asparagus is dioecious plant, which means that male and female flowers develop on the separate plants. Flowers grow individually or in clusters composed of two to three flowers.

The fruit is a small red berry 6–10 mm diameter, which is poisonous to humans.

Spears can be green, white or purple. White spears grow below the ground, without exposure to the sunlight (which is essential for the activation of pigments in the plant). Purple variety is artificially created (genetically altered asparagus), but it changes the color into green during the cooking.

Only young asparagus shoots are commonly eaten: once the buds start to open, the shoots quickly turn woody.

As a vegetable, the tender, succulent shoots of asparagus not only touches upon people’s senses of taste, touch, smell, and vision, but also provides excellent nutrition.

Spears can grow 6 inches per day during a period of 6 to 7 weeks. Harvest of the fully grown spears takes place each day or every 4 to 5 days, depending on the outer temperatures (higher temperature accelerates growth).

The easiest way to get asparagus into your diet is to eat it raw; simply cut it up and add to your salad.

Asparagus has underground stem (rhizome) and strong, fibrous root system. At the beginning of the spring, rhizome starts to produce buds that transform into spears - edible parts of asparagus.

Another simple thing to do is to just steam it for a few minutes and it is done. Careful not to overcook it.

Asparagus is an excellent source of vitamin K, folate, copper, selenium, vitamin B1, vitamin B2, vitamin C, and vitamin E. It is a very good source of dietary fiber, manganese, phosphorus, vitamin B3, potassium, choline, vitamin A, zinc, iron, protein, vitamin B6, and pantothenic acid.

The English word “asparagus” derives from classical Latin, but the plant was once known in English (prior to 1400) as “asperages” or “aspergy,” and then later (sixteenth and seventeenth centuries) as sperage, sparage, or sperach, from the Medieval Latin sparagus. This term itself derives from the Greek aspharagos or asparagos, although some believe the Greek term originated from foreign sources, likely from the Persian asparag, meaning “sprout” or “shoot.” The original Latin name has now supplanted the English word.

This vegetable is pictured as an offering on an Egyptian frieze dating to 3000 BC.

Asparagus has stout stem that can reach 39 to 59 inches in height.

Greeks and Romans ate it fresh when in season, and dried the vegetable for use in winter; Roman Epicureans even froze it high in the Alps, for the Feast of Epicurus.

Emperor Augustus created the “Asparagus Fleet” for hauling the vegetable, and coined the expression “faster than cooking asparagus” for quick action.

Hippocrates, the ancient Greek doctor, used asparagus to treat diarrhoea and pains of the urethra.

In the 1st century CE, Dioscorides, the Green physician, recommended a decoction of the root to improve urine flow and to treat kidney problems, jaundice, and sciatica. He also recommended holding the chewed root against aching teeth.

China, Peru, and Mexico are the three biggest asparagus producing countries in the world.
Share This