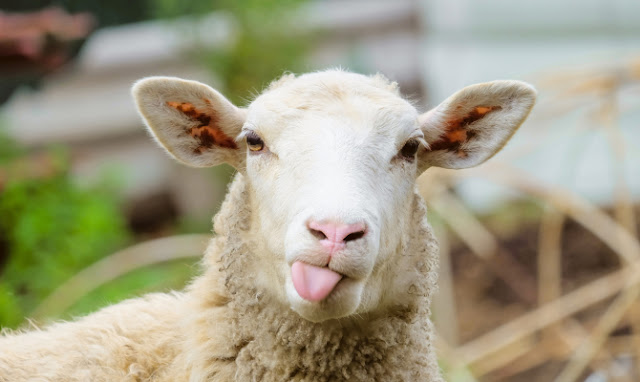 Sheep is social animal. It likes to be part of the group and to follow the leader toward the new pastures.

Although the name “sheep” applies to many species in the genus Ovis, in everyday usage it almost always refers to domestic sheep (Ovis aries).

Sheep communicate with each other via bleating, grunting and snorting sounds.

Sheep are raised for their wool, hair or pelts as well as milk and meat.

Sheep usually breed during the autumn and winter (certain breeds mate all year round). Male, known as ram, can mate with 30 to 35 females during the breeding season (during a period of 60 days).

Sheep may be the first domesticated ruminant, tamed by nomadic people in the Middle East and Asia 11,000 years ago, perhaps even before agriculture gave rise to civilization.

Pregnancy in ewes (females) lasts 145 to 155 days and ends with 1 to 3 babies (lambs). Babies can stand on their feet from the moment of birth. Ewes form strong bonds with their offspring and bleat to find them in the herd (when they wander off). Lambs are fully weaned at the age of 2 to 3 months.

The exact line of descent between domestic sheep and their wild ancestors is unclear. The most common hypothesis states that domestic sheep aries is descended from the Asiatic (O. orientalis) species of mouflon.

Sheep were regarded as sacred animals in the ancient Egypt. Mummified sheep can be found in the tombs of some pharaohs.

Woolly sheep began to be developed around 6000 BC in Iran, and cultures such as the Persians relied on sheep’s wool for trading. They were then imported to Africa and Europe via trading.

Position of the ears and facial expression show emotional state of the sheep.

It is estimated that there are more than 200 distinct sheep breeds; some sources give a count of a 1000 or more breeds, but these numbers cannot be verified, according to some sources.

They are extremly versitile and exist in a wide variety of habitats worldwide ranging from temperate mountain forests to desert conditions.

The average lifespan of a sheep is 10 to 12 years, though some sheep may live as long as 20 years.

Sheep knows what to eat when it doesn't feel well. It recognizes and eats plants with known healing potential to cure itself.

The physical details of domestic sheep vary greatly among breeds. Head and body length is 120-180 centimeters and shoulder height is 65-127 cm. They weigh between 45 and 100 kilograms (100 and 350 lb). Female sheep tend to be three quarters to two thirds the size of males.

Colors of domestic sheep range from pure white to dark chocolate brown, and even spotted or piebald.

While originally all rams had horns, sheep can have horns or not, depending upon their breed, sex, and genetics. In some sheep breeds, both sexes are horned. In some breeds, only the rams have horns.

Sheep has good memory and ability to recognize face of 50 different individuals (both of other sheep and humans). Despite the widespread belief that sheep are stupid, they are actually very intelligent animals (slightly less intelligent than pigs), capable of solving various problems.

Sheep have good hearing, and are sensitive to noise when being handled. Sheep have horizontal slit-shaped pupils, with excellent peripheral vision; with visual fields of about 270° to 320°, sheep can see behind themselves without turning their heads. Sheep also have an excellent sense of smell.

Sheep follow a diurnal pattern of activity, feeding from dawn to dusk.

Sheep are exclusively herbivorous mammals. They mostly eat grass, clover, forbs, and other pasture plants. Sheep especially love forbs. In fact, it is usually their first choice of food in a pasture. A forb is a broad-leaf plant other than grass. It is a flowering plant. Forbs are often very nutritious. As compared to cattle, sheep eat a greater variety of plants and select a more nutritious diet. Other than forage, the other staple feed for sheep is hay, often during the winter months.

Sheep is a grazer. Its diet is based on different types of grass. Sheep consumes 2 to 4.5 pounds of food per day.

Sheep belong to the ruminant classification of animals. Ruminants are characterized by their four-chambered stomach and “cud-chewing” behavior. Cud is a food bolus that is regurgitated, rechewed, and reswallowed.

Sheep are extremely social animals. In fact, they are “flock” animals, meaning that they prefer to be with other sheep. The dominance hierarchy of sheep and their natural inclination to follow a leader to new pastures were the pivotal factors in sheep being one of the first domesticated livestock species.

Sheep establish a dominance hierarchy through fighting, threats and competitiveness.

Sheep follow a similar reproductive strategy to other herd animals. A group of ewes is generally mated by a single ram, who has either been chosen by a breeder or has established dominance through physical contest with other rams. After mating, sheep have a gestation period of about five months; most lambs born in mid spring. One or two lambs, which are able to stand and suckle within a few minutes of birth, are born to each ewe.

Sheep has field vision of around 300 degrees (it can see behind its head), but it has poor depth perception. Sheep compensates its poor eyesight with excellent sense of hearing.

Today, there are little over one billion sheep on the planet.

Religious symbolism and ritual involving sheep began with some of the first known faiths: Skulls of rams (along with bulls) occupied central placement in shrines at the Çatalhöyük settlement in 8,000 BC.

In Ancient Egyptian religion, the ram was the symbol of several gods: Khnum, Heryshaf and Amun.

Most species of sheep have spiral horns. Sheep are born with long tail that is often docked at birth to prevent accumulation of dirt.

In Madagascar, sheep were not eaten as they were believed to be incarnations of the souls of ancestors.

Sheep play an important role in all the Abrahamic faiths; Abraham, Isaac, Jacob, Moses, King David and the Islamic prophet Muhammad were all shepherds.

Sheep has an average lifespan 6 to 12 years.

Followers of Christianity are collectively often referred to as a flock, with Christ as the Good Shepherd, and sheep are an element in the Christian iconography of the birth of Jesus.

Sheep is covered with wool that can be fine (soft), of medium quality or coarse. Wool can be short or long, milky white, brown or black-colored.

Christ is also portrayed as the Sacrificial lamb of God (Agnus Dei) and Easter celebrations in Greece and Romania traditionally feature a meal of Paschal lamb.

Astrologically, Aries, the ram, is the first sign of the classical Greek zodiac, and the sheep is the eighth of the twelve animals associated with the 12-year cycle of in the Chinese zodiac, related to the Chinese calendar.

Counting sheep is a mental exercise used in some cultures as a means of putting oneself to sleep. In most depictions of the activity, the practitioner envisions an endless series of identical white sheep jumping over a fence, while counting them as they do so. The idea, presumably, is to induce boredom while occupying the mind with something simple, repetitive, and rhythmic, all of which are known to help humans sleep.

Probably the most famous sheep was Dolly the Sheep. She was named after Dolly Parton, and was the first large mammal clone. She did not live as long as a regular sheep, because clones have health problems. This is only known because of Dolly.

The highest price ever achieved for a sheep is $369,000, paid by Jimmy Douglas for the eight-month-old Texel tup, Deveronvale Perfection, in Lanark, Scotland, in August 2009. Bred in Banffshire sheep farmer Graham Morrison, this very valuable sheep will be used for breeding purposes.

Turkish sheep die in “mass jump.” First one sheep went over the cliff edge, only to be followed by the whole flock, according to the reports. More than 400 sheep died in the 15-metre (50-foot) fall – their bodies cushioning the fall of 1,100 others who followed. Apparent suicide isn’t unheard of in animals.

Sheep can recognise emotions in facial expression, not only in their species but also in humans, researchers say.

The sight of sheep grazing on the south lawn of the White House may seem unusual, but during World War I, it was a highly visible symbol of home front support of the troops overseas. The flock, which numbered 48 at its peak, saved manpower by cutting the grass and earned $52,823 for the Red Cross through an auction of their wool.
Share This