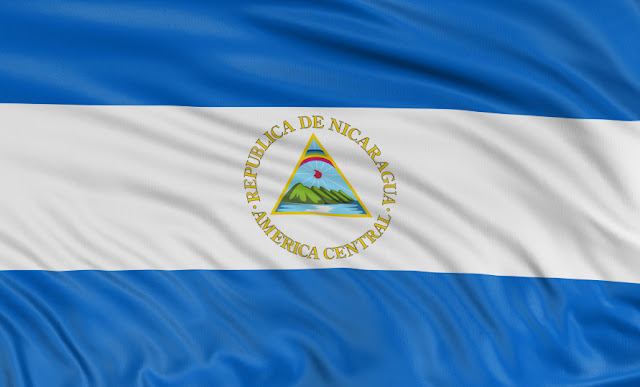 Nicaragua has a high risk for dengue fever and malaria, as well as typhoid fever, hepatitis A, and other waterborne or foodborne diseases.

Nicaragua, set between the Pacific Ocean and the Caribbean Sea, is a Central American nation known for its dramatic terrain of lakes, volcanoes and beaches.

The Caribbean coast of Nicaragua is often referred to as the 'Mosquito Coast' because it is swampy and the perfect breeding ground for mosquitos.

The official name of the country is the Republic of Nicaragua.

The Bryan-Chamorro Treaty, signed in 1916, gave the United States an option to build a canal through Nicaragua. The treaty was terminated in 1970.

Nicaragua is bordered by Honduras to the north, the Caribbean Sea to the east, Costa Rica to the south, and the Pacific Ocean to the west.

Nicaragua's capital city is Managua, which was almost entirely destroyed in 1972 when an earthquake hit.

Pittsburgh Pirates baseball star was killed when his plane crashed en route to Nicaragua to deliver aid after the 1972 earthquake. He decided he needed to make the trip because previous shipments of aid were not reaching the people it was intended for.

Tourism is an important industry in Nicaragua, which has led to positive impacts on the construction, commercial, agricultural, and financial industries in recent years. Approximately 60,000 Americans visit Nicaragua as tourists each year.

Managua is the capital and largest city of Nicaragua. Located on the southwestern shore of Lake Managua, the city was declared the national capital in 1852.

Nicaragua is home to the largest freshwater body of water in Central America - Lago de Nicaragua.

Nicaragua is mountainous in the west, with fertile valleys. Two big lakes, Nicaragua and Managua, are connected by the Tipitapa River. The Pacific coast is volcanic and very fertile. The swampy Caribbean coast is aptly called the “Mosquito Coast.”

Mogotón is a mountain on the border of Nicaragua and Honduras. It rises 2,107 meters (6,913 feet) above sea level and is the highest point in Nicaragua.

Nicaragua has a coastline length of 910 kilometers (565 miles) most of which lies on the Caribbean.

Nicaragua has all kinds of beaches imaginable, from dark sand to white sand to virgin and wild beaches with an abundance of wildlife refuges.

San Juan del Sur is the most popular beach in the country. The beach is uniquely located in a splendid crescent-shaped bay. Over the years it has become highly visited by both tourists and locals, making a bustling commercial scene gradually arise.

Nicaragua is susceptible to natural disasters such as volcanoes, earthquakes, hurricanes, and landslides.

The climate in Nicaragua is tropical in the lowlands and it gets cooler in the highlands.

Political turmoil has continued in Nicaragua, despite efforts to bring peace to the region and put an end to the civil unrest.

León Viejo is one of the oldest Spanish colonial settlements in the Americas. It did not develop and so its ruins are outstanding testimony to the social and economic structures of the Spanish Empire in the 16th century. León Viejo is UNESCO World Heritage Site.

In 1933 the U.S. troops withdrew from Nicaragua after having fought guerrilla leader Gen. Cesar Augusto Sandino and his men for six years.

The Cathedral of León is a significantly important and historic landmark in Nicaragua. The Cathedral’s construction lasted between 1747 and 1814 and was consecrated by Pope Pius IX in 1860. Cathedral has maintained the status of being the largest cathedral in Central America and one of the best known in the Americas due to its distinct architecture and special cultural importance. The Cathedral of León is UNESCO World Heritage Site.

For a nine month period in 1925 the U.S. withdrew its forces from Nicaragua, but conflict began again and the U.S. returned.

Granada is the oldest colonial city in Nicaragua. Its colonial buildings in pastel shades, interesting history and relative safety make it an important tourism destination.

The earliest settlers were probably related to the Maya and Aztec people of Mexico. One of the largest groups of early people was the Nicarao. Spain ruled Nicaragua and many countries in Central and South America during the 16th century until the early 19th century. Nicaragua gained its independence from Spain in 1821 and became part of the Mexican empire for several years. Then it joined a group of nearby countries with a central government in Guatemala City called Provinces of Central America. Nicaragua split from the group in 1838 and became fully independent.

Nicaraguan cuisine includes a mixture of the indigenous Miskito people, Spanish cuisine and Creole cuisine. Much of Nicaraguan food is based on corn. Cassava, beans and chili pepper are also widely used as ingredients in different Nicaraguan dishes. While the Pacific coast’s main staple revolves around local fruits and corn, the Caribbean coast’s cuisine makes use of seafood and coconut.

The United States supported the Conservative forces in 1909 when they rebelled against President Zelaya, who executed 500 revolutionary fighters. The U.S. sent warships to the region.

The national sport of Nicaragua is baseball, which is even more popular than football!

Lake Managua is the only freshwater lake where sharks live. Bull sharks enter the lake by traveling up the Rio San Juan river from the Atlantic Ocean. The sharks can adapt to fresh water, but they are now rarely found in the lake.

The name Nicaragua comes from the words nicarao and agua. Nicarao Indians were the first Indian tribes to occupy Lake Nicaragua, and the world agua means water in Spanish. When the Spaniards arrived in the country in the 1500s, they named it after the people they met and the vast amount of water in and around the country.

Nicaragua is among the poorest countries in the Americas.

The local people call themselves Nicas, but most outsiders refer the people as Nicaraguans.
Share This