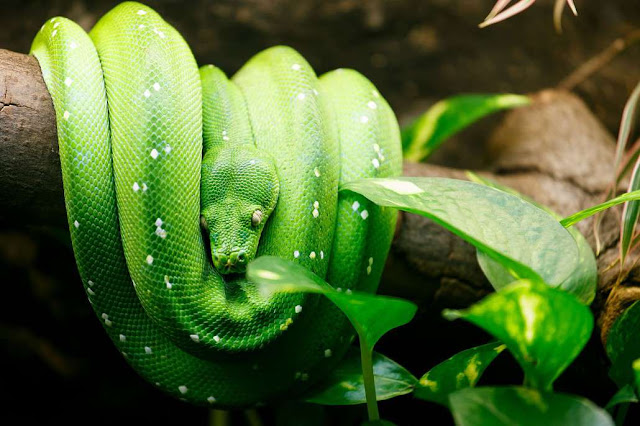 The Pythonidae, commonly known simply as pythons, are a family of nonvenomous snakes.

Pythons have heat-sensing organs which help them locate the prey.

There is also a genus within Pythonidae which carries the name Python.

Female lays 12-36 eggs. She protects eggs and keeps them warm by coiling her body around them. When babies hatch, mother leaves the nest. Young snakes need to look after themselves from the first day.

There are 41 species of python found within the family Pythonidae.

Pythons are cold-blooded animals, but they can increase their body temperature through sunbathing.

Pythons are found found in Africa, Asia, and Australia.

One of the longest known python species is Reticulated Python which can reach 30 feet in length. Most snakes weigh between 260-300 pounds.

More specifically they are found in sub-Saharan Africa, Nepal, India, Sri Lanka, Burma, southern China,
Southeast Asia, and from the Philippines southeast through Indonesia to Papua New Guinea and Australia.

Pythons can move 1 mile per hour on the flat ground.

In captivity, pythons may live up to 40 years.

Pythons are long lived snakes. The lifespan is from 15 to 30 years, depending on the species.

The largest python species is the reticulated python (Python reticulatus) reaching up to 10 meters (33 feet) in length and have a weight up to 115 kilograms (250 pounds).

People kill pythons because of their beautiful skin that is used in fashion industry.

The smallest python species is the pygmy python or anthill python (Antaresia perthensis) reaching about 50 centimeters (19.5 inches) in length and have a weight near 210 grams (7.4 ounce).

Colors of the python’s skin are usually similar to the colors of its habitat. Snakes blend easily with their environment.

The coloration of different species of python vary widely.

Depending on their local habitats and need for camouflage, coloring can range from elaborately patterned scales (most species) to solid brown to bright green.

Most pythons seek shelter in tree branches or hollows, among reeds, in rocky outcrops, or in abandoned mammal burrows.

Most pythons are terrestrial to semiarboreal, and a few, such as the green tree python (Morelia viridis) [photo below] of Australia and Papua New Guinea, are strongly arboreal.

Although they are mainly located on the ground or in the trees, pythons are excellent swimmers.

Terrestrial pythons are regularly found near water and are proficient swimmers, but they hunt and eat almost exclusively on land.

Pythons may be active day or night, depending on species, habitat, and when prey is most active.

They use both sight and smell to locate prey.

A python tastes the air with its tongue to smell if prey is nearby. Also special temperature-sensing pits on its face can sense the heat of a nearby animal – this helps them find warm-blooded prey even in the dark or among dense foliage.

Pythons attack their prey from the ambush. They are well camouflaged and hidden usually in the trees.

Size of the prey determines the time needed for digestion. Bigger prey can keep the snake satiated for weeks or months. Pythons eat 4-5 times per year.

Most python species are ambush predators, in that they typically remain motionless in a camouflaged
position, and then strike suddenly at passing prey.

Pythons use their sharp, backward-curving teeth, four rows in the upper jaw, two in the lower, to grasp prey then quickly wraps its body around the victim and squeezes. The python doesn’t actually crush the prey and break its bones, though. Instead, it squeezes tightly so that the prey animal can’t breathe; each time its prey exhales, the constrictor tightens its coils to take up space, causing suffocation. The python can also feel the prey’s heart beating, so when it stops, the snake knows it is safe to release its coils and begin to eat.

Everything except fur and feathers will be digested. Undigested material can be found in the python’s poop.

Then the python unhinges its jaws so it can open its mouth wide enough to swallow the prey whole, usually head first.

Python may take several days or even weeks to fully digest the prey.

After eating, a python can go several weeks, if not months, without needing to feed again.

After they kill an animal, they will swallow it in one piece.

Depending on the size of the snake, pythons may eat rodents, rabbits, birds, lizards, caimans and
mammals like monkeys, wallabies, pigs, deer, or antelope.

They will generally not attack humans unless startled or provoked, although females protecting their eggs can be aggressive. Reports of attacks on human beings were once more common in South and Southeast Asia, but are now quite rare.

Pythons are egg layers. After they lay their eggs, females typically incubate them until they hatch. When the air temperature begins to drop, she generates heat by shivering in a series of minuscule muscle contractions and thus maintains an elevated and fairly constant incubation temperature. During the incubation period, females will not eat and only leave to bask to raise their body temperature.

After the eggs hatch, she leaves, and the babies are on their own.

Pythons are constrictors. They kill their prey by squeezing them until they stop breathing.

Many species have been hunted aggressively, which has decimated some, such as the Indian python,
Python molurus.

Thirteen species of python are on the International Union of Conservation of Nature’s Red List of Threatened Species.

The longest snake – ever (captivity) is Medusa, a reticulated python (python reticulatus), and is owned by Full Moon Productions Inc. in Kansas City, Missouri, USA. When measured on 12 October 2011, she was found to be 7.67 meters (25 ft 2 in) long. Medusa also holds the current ‘Longest Snake – Living (captivity)’ title.

A ball python (Python regius) holds the record for the longest lifespan among snakes in captivity. Acquired by the Philadelphia Zoo in 1945, the snake lived at the zoo for 48 years.

Many people in Asia, Australia, and Africa live closer to pythons than they think, as the snakes often
use backyards, basements, and roofs as their habitat.

In the United States, an introduced population of Burmese pythons (Python bivittatus), has existed as an invasive species in the Everglades National Park since the late 1990s.

Most species in this family are available in the exotic pet trade. However, caution must be exercised with the larger species, as they can be dangerous; rare cases of large specimens killing their owners have been documented.
Share This