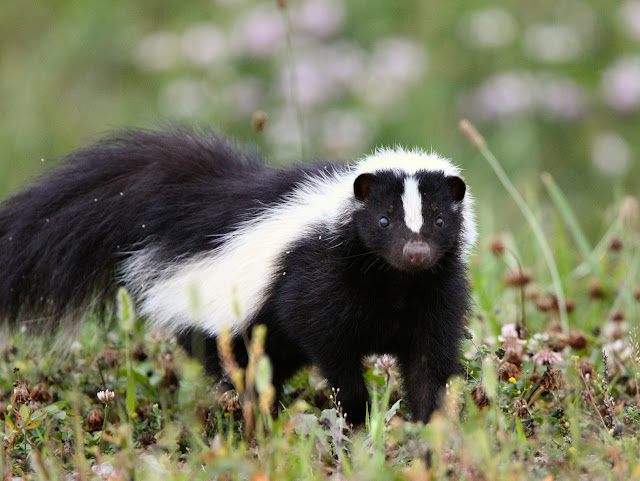 Skunks are mammals, usually black with a white stripe on their back and a fluffy tail.

Skunks can survive a snake bite.

The skunk family includes 10 species of skunks found in North and South America and 2 species of stink badgers found in southeast Asia.

They have poor eyesight, but they have excellent sense of smell and hearing.

They can run only 10 miles per hour.

Their average lifespan in the wild is 3 years. In captivity, they may live for up to 10 years.

During mating season, one male with get in touch with more females.

Their worst enemies are coyotes, bobcats and owls.

Pregnancy lasts between 7 and 10 weeks and female gives birth to 2-10 babies. Mother takes care of her babies.

Although the most common fur color is black and white, some skunks are brown or grey and a few are cream-colored.

Skunks live up to 3 years in the wild. They can survive up to 10 years in captivity.

Some skunks are striped, and some are spotted or have swirl patterns on their fur.

They have moderately elongated bodies with relatively short, well-muscled legs and long front claws for digging.

Skunk can spray its oily and smelly substance up to 10 feet distance.

Although they have excellent senses of smell and hearing, they have poor vision, being unable to see objects more than about 3 meters (10 feet) away.

Skunks are solitary animals when not breeding, though in the colder parts of their range, they may gather in communal dens for warmth.

They are crepuscular which means they come out mostly at dusk and dawn.

Before it sprays the victim, skunk will turn its back, lift its tail, start hissing and stumping with its feet. Those are the warning signs that precede spraying.

Skunks are one of the primary predators of the honeybee, relying on their thick fur to protect them from stings. The skunk scratches at the front of the beehive and eats the guard bees that come out to investigate. Mother skunks are known to teach this behavior to their young.

Skunks can only run about 16 kilometers (10 miles) per hour and will not try to outrun a predator.

Two glands near their anus produce smelly substance that is released when animals are threatened. This substance is not harmful for the victims, but they will not be able to get rid of the smell during next couple of days.

Skunks are legendary for their powerful predator-deterrent—a hard-to-remove, horrible-smelling spray. A skunk’s spray is an oily liquid produced by glands under its large tail. To employ this scent bomb, a skunk turns around and blasts its foe with a foul mist that can travel as far as 3 meters (10 feet).

If threatened, skunks stamp their front feet, lift their tail, and growl. Some species of skunk even spring into a handstand before spraying, which puts the skunk’s warning markings on full display. If the person or animal doesn’t retreat, the skunk aims the spray at the eyes, allowing the skunk to escape.

Skunks are small animals. They reach 8-19 inches in size and weigh up to 14 pounds.

Skunk spray causes no real damage to its victims, but it sure makes them uncomfortable. It can linger for many days and defy attempts to remove it. As a defensive technique, the spray is very effective.

Most predators of the Americas, such as wolves, foxes and badgers, seldom attack skunks, presumably out of fear of being sprayed. The exceptions are dogs, reckless predators whose attacks fail once they are sprayed, and the great horned owl. It is the skunk’s only regular predator. In one case, the remains of 57 striped skunks were found in a single owl nest.

Skunks usually nest in burrows constructed by other animals, but they also live in hollow logs or even abandoned buildings. In colder climates, some skunks may sleep in these nests for several weeks of the chilliest season.

Skunks mate in early spring and are polygynous, meaning that successful males mate with more than one female.

Female skunks give birth every year. Their gestation period often lasts around two months and they give birth to 2 to 10 offspring at a time.

Baby skunks are called kits. Kits are blind when born, since their eyes are sealed shut until around the age of 3 weeks. They are weaned at 2 months old. After they are weaned, they leave the den and at to 10 to 12 months old they are ready to have their own kits.

Skunks are omnivores, which mean that they eat both plants and animals. They like to eat fruits, insects, worms, reptiles and rodents.

The mother is protective of her kits, spraying at any sign of danger. The male plays no part in raising the young.

Skunks are not aggressive toward humans. They only spray in self defense.

Some people can’t smell skunks horrible-smelling spray at all and not because they have no sense of smell. Specific anosmia, or insensitivity to one particular smell, is actually more common than general anosmia and one in every 1000 people has no ability to detect skunk spray.

A group of skunks is called a surfeit.

The official name for the skunk family is Mephitidae, which means “stink.”