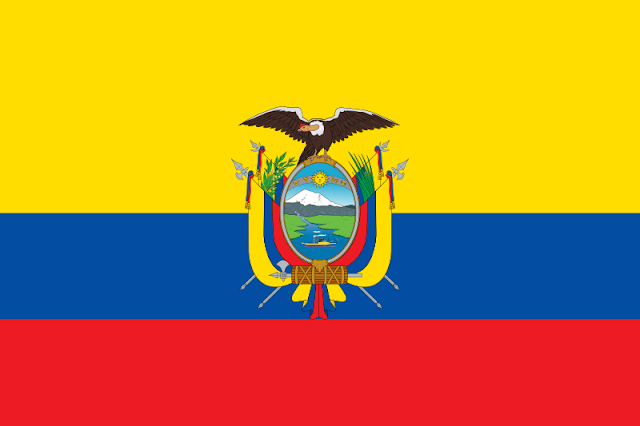 Ecuador is a country straddling the equator on South America’s west coast.

The official name of Ecuador is the Republic of Ecuador.

There are approximately 3.3 million internet users in Ecuador, and 2.5 million televisions.

Ecuador is bordered by Colombia on the north, Peru on the east and south, and the Pacific Ocean to the west.

Many of the people living in Columbia, to Ecuador's north, move to Ecuador to escape the violence surrounding the drug trade in Columbia.

Approximately 72% of Ecuadorians are mestizos, 15% are indigenous, 6% are white, and 7% are Afro-Ecuadorian.

Ecuador is made up of 24 provinces.

Ecuador has a total area is 283,561 square kilometers (109,484 square miles), including the Galápagos Islands.

Quito, Ecuador’s capital, sits high in the Andean foothills at an elevation of 2,850 meters (9,350 feet) above sea level, it is the highest official capital city in the world. Quito, along with Kraków, were the first World Cultural Heritage Sites declared by UNESCO in 1978.

The 26th highest active volcano in the world is the Cotapaxi Volcano in Ecuador. It is 19,357 feet high.

Natural resources in Ecuador include petroleum, hydropower, timber, and fish.

Soccer is one of the Ecuadorian's favorite pastimes.

Ecuador is divided into four main and very unique geographic regions: La Costa or “the coast”, La Sierra or “the highlands”, La Amazonía also known as El Oriente or “the east” and La Región Insular, the region comprising the Galápagos Islands.

Chimborazo is the highest mountain in Ecuador and the farthest point from the center of the earth. The South American mountain stands 6,268 meters (20,564 feet) above sea level, is actually 6,384 kilometers (3,944 miles) from the Earth’s core, making it 2 kilometers (1.24 miles) higher than its counterpart in the Himalayas due to differences in the planet’s diameter on different continents. So Chimborazo is, in fact, the place on Earth that is closest to the moon and outer space.

Ecuadorians celebrate a holiday called 'The Day of the Dead'.

With its coastline stretching over 2237 kilometers (1390 miles), Ecuador has over 100 beaches.

The guinea pig is a delicacy in Ecuador. It supposedly tastes like rabbit.

Ecuador is classed as a “megadiverse” country, ranking as the 3rd most biodiverse country in the world after Brazil and Colombia.

The smallest country in the Andean Highlands is Ecuador.

In 2008, Ecuador became the first country to declare that nature itself has constitutional rights.

Galápagos National Park established in 1959 and beginning operations in 1968, is Ecuador’s first national park and a UNESCO World Heritage Site. The Galápagos Islands are well known as a region of distinct fauna, famous as the place of birth of Darwin’s Theory of Evolution.

The four geographical regions of Ecuador include the coastal lowlands, the mountain highlands, the eastern jungle lowlands, and the Galapagos Islands.

Ecuador is one of the world's biggest banana exporters.

Charles Darwin began studying evolution in the Galapagos Islands because it was there that he noticed the diversity of species.

The Galapagos Islands are home to some of the most varied species, including giant turtles and giant land iguanas.

The Church of the Society of Jesus known colloquially as la Compañía, is a Jesuit church in Quito. It is among the best-known churches in Quito because of its large central nave, which is profusely decorated with gold leaf, gilded plaster and wood carvings.

The Galapagos Islands are home to some of the most varied species, including giant turtles and giant land iguanas.

Visitors to the Galapagos Islands are not permitted to bring anything that may alter the ecosystem.

Spanish is the official language. Some residents of Ecuador also speak Quechua and other Amerindian native languages.

Topped by a huge statue of La Virgen de Quito (Virgin of Quito; construction lasted from 1955 to 1975), with a crown of stars, angelic wings and a chained dragon atop the world, the hill to the south of Old Town called El Panecillo (the Little Bread Loaf) is a major Quito landmark.

The monetary unit in Ecuador is the U.S. dollar.

The Church and Monastery of St. Francis commonly known as el San Francisco, is a 16th-century Roman Catholic complex in Quito.The imposing structure has the distinction of being the largest architectural ensemble among the historical structures of colonial Latin America.

Ecuador's capital city is Quito and its largest city is Guayaquil.

The Basilica of the National Vow is a Roman Catholic church located in the historic center of Quito. The church was built over several decades beginning in 1926. The basilica is the most important work of neo-Gothic Ecuadorian architecture and is one of the most representative of the Americas. It is the largest neo-Gothic basilica in the New World.

Ecuador is the world’s largest exporter of bananas, accounting for up to 27% of all bananas exported in 2015.

Almost 60 per cent of the world’s high grade fine cocoa is produced on farms surrounding the coastal city of Guayaquil an output that makes it the world’s capital of the sweet delicacy.

The national tree of Ecuador is the cinchona tree which produces Quinine, the first drug used to prevent and treat malaria.

Ecuador is home to the largest amount of hummingbirds and hummingbird species in the world, with at least 135 species sighted within the country’s borders.

In 2008, Ecuador was the first country to officially recognise the rights of nature. Rather than treating nature as property, Ecuador recognises that nature has constitutional rights and has the “right to exist, persist, maintain and regenerate its vital cycles.”

The Panama hat is actually from Ecuador. Straw hats woven along the Ecuadorian coast were taken to Panama initially to be sold to canal workers and, after the canal opened, to affluent westerners passing through the Panama Canal.

Ecuador is the Spanish word for equator. The equator runs right through Ecuador.

Guinea pig, known as ‘cuy’, is considered a delicacy in Ecuador, its consumption seen as an ancient tradition.

Vilcabamba is called the Valley of Longevity – locals assert that it is not uncommon to see a person reach 100 years of age and it is claimed that many have gotten to 120, even up to 135, which would make it an area with the oldest inhabitants in the world.

It is well known that Ecuador is named after the equator which runs through the country. It is in fact the only country in the world officially named after a geographical feature.