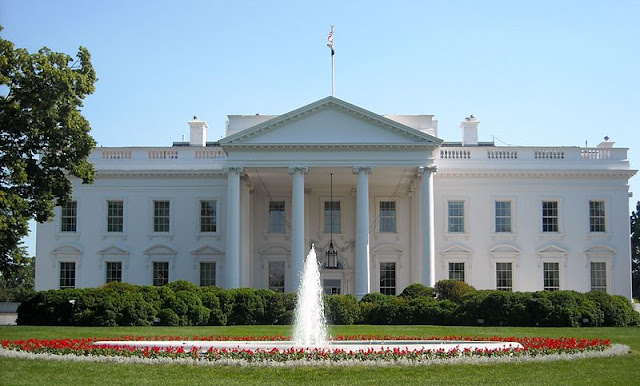 The White House is the official residence and principal workplace of the President of the United States, located at 1600 Pennsylvania Avenue NW in Washington, D.C.

It has been the residence of every U.S. president since John Adams in 1800.

The majority of the construction was completed by both free and enslaved African- Americans, as well as immigrants.

The very first president to move into the house was John Adams.

The White House was designed by Irish-born architect James Hoban in the 1790s in the Neoclassical style. Rebuilt after a British attack in 1814, the “President’s House” evolved with the personal touches of its residents, and accommodated such technological changes as the installation of electricity. The building underwent major structural changes in the early 1900s under Teddy Roosevelt, who also officially established the “White House” moniker, and again under Harry Truman after WWII.

John Adams moved in the White House in 1800. He did not live there very long.

The White House and grounds cover just over 18 acres (about 7.3 hectares).

Thomas Jefferson moved into the White House in 1801.

George Washington never lived in the White House in Washington, the city named for him, because he died before it was completed.

Teddy Roosevelt was responsible for having the West Wing built. Thomas Jefferson had the idea about 100 years earlier, but his idea didn't materialize.

In 1948, when Harry S. Truman was president, the White House was almost condemned. It had to be repaired as it was close to falling down due to structural issues. The repair was completed in 1952.

There is replica of the White House in Virginia that was built using the same plans as were used for The White House. It would sell for $4 million. The real White House is worth as much as $286 million.

In the 1790s, the people of Philadelphia were not happy that the president's home would be in Washington, so they built their own home for the president. It failed to tempt the president to live there.

The original cornerstone, set in place by freemasons having a few alcoholic beverages, has not been seen since that day in 1792. Nobody knows its exact location.

There are 132 rooms, 32 bathrooms, and 6 stories — the Ground Floor, State Floor, Second Floor, and Third Floor, as well as a two-story basement.

There are 35 bathrooms in the White House, and a total of 132 rooms on six levels.

Two floors of the White House are reserved for the First Family.

The West Wing houses the President’s office (the Oval Office) and offices of his senior staff, with room for about 50 employees.

Thomas Jefferson anonymously submitted an entry into the design competition. He didn't win. He did become the third president of the United States however.

About 6,000 people visit the White House each day.

George Washington chose the winning design for the White House.

For recreation, the White House has a variety of facilities available to its residents, including a tennis court, jogging track, swimming pool, movie theater, billiard room, putting green and a bowling lane.

It takes 570 gallons to paint the outside of the building.

With five full-time chefs, the White House kitchen is able to serve dinner to as many as 140 guests and hors d’oeuvres to more than 1,000.

The White House receives up to 30,000 visitors each week.

Washington itself was named after George Washington.

Urban legend says that the White House has a secret laser defense system and anti-aircraft missiles on the roof.

In February 1974, a stolen army helicopter landed without authorization on the White House’s grounds. Twenty years later, in 1994, a light plane crashed on the White House grounds, and the pilot died instantly.

The land that became Washington, DC was acquired from Virginia and Maryland, where slavery was practiced. Historic payroll reports document that many of the workers hired to build the White House were African Americans – some free and some slave.

The White House requires 2,150 liters (570 gallons) of paint to cover its outside surface.

The property is a National Heritage Site owned by the National Park Service and is part of the President’s Park.

The White House's address is 1600 Pennsylvania Avenue in Washington, D.C.

In 2007, it was ranked second on the American Institute of Architects list of “America’s Favorite Architecture”.

Some real-estate pros think that the White House value is more than $100 million. And if all of the artwork, historic artifacts, and American memorabilia were included in the sale, the asking price would soar—to upwards of $250 million.

There is a persistent rumour that President Abraham Lincoln’s ghost, also known as ‘the White House Ghost’, has haunted the building since his death in 1865.

The White House is regularly featured in film and TV, most notably the American series ‘The West Wing’ and the 1996 blockbuster ‘Independence Day’ in which it is shown being destroyed by an alien spaceship.
Share This