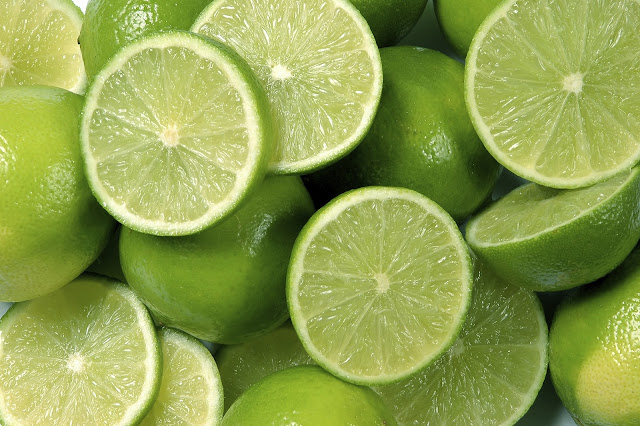 A lime is a hybrid citrus fruit.

Lime is used for the preparation of limeade, and various alcoholic and nonalcoholic cocktails and beverages. Lime juice and zest are often used for the preparation of marinades for meat (juice softens meat and improves flavor of cooked meals). Lime zest is ingredient of numerous pies. Pickled lime is integral part of Indian cuisine. Marmalade made of lime is popular in Australia. Lime leaves are consumed in South and East Asia.

There are several species of citrus trees whose fruits are called limes, including the Persian lime, Key lime, kaffir lime, and desert lime.

Scurvy (disease that results from vitamin C deficiency) was widely spread among the sailors in the 19th century. Since lemon was expensive, lime was selected as second best natural cure for this disease. British sailors were obliged to consume one lime per day to prevent development of scurvy. Unusual diet is the reason they (British sailors) are known as "limeys" today.

Although the precise origin is uncertain, wild limes are believed to have first grown in Indonesia or Southeast Asia.

Essential oils extracted from lime have application in the cosmetic industry for the production of fragrances. Citrus-rich aroma, typical for lime, is popular and often used in manufacture of cleansing products and in aromatherapy.

Arab traders brought lime trees back from their journey to Asia and introduced them into Egypt and Northern Africa around the 10th century.

India is the greatest manufacturer of lime in the world.

Limes were introduced to the western Mediterranean countries by returning Crusaders in the 12th and 13th centuries.

Christopher Columbus took citrus seeds, probably including limes, to the West Indies on his second voyage in 1493, and the trees soon became widely distributed in the West Indies, Mexico, and Florida.

The English word “lime” was derived, via Spanish then French, from the Arabic word līma (Persian: limu).

The tree seldom grows more than 5 meters (16 feet) high and if not pruned becomes shrublike. Its branches spread and are irregular, with short stiff twigs and small sharp thorns.

Lime can be propagated via seed, cuttings and root sprouts.

Lime has tangy sour taste, more acidic compared to lemon. Sweet lime is a sort of lime that has sweet flavor. It grows in tropics.

The flowers are white and about 2.5 cm (1 in) in diameter. Flowers and fruit appear throughout the year, but are most abundant from May to September in the Northern Hemisphere.

Lime plant has a lifespan of over 10 years.

Fruit is covered with thin peel. Transparent membrane divides greenish flesh into segments. Each segment contains hundreds of miniature sacs filled with juice. Fruit continues to ripen after the harvest.

The fruit is usually about 3–6 centimeters (1.2–2.4 inches) in diameter, oval to nearly globular in shape, the peel is thin and greenish yellow when the fruit is ripe.

Fruit of lime is oval or globular-shaped. It has small nipple on top of it. Fully ripe fruit is yellowish green colored.

The pulp is tender, juicy, yellowish green in color, and decidedly acid.

Lime blooms and produces fruit all year round. In the northern hemisphere, lime produces greatest quantity of flowers and fruit from May to September.

Raw limes are 88% water, 10% carbohydrates and less than 1% each of fat and protein.

Limes have higher contents of sugars and acids than lemons do.

Lime has ovate leaves with entire margins. Leaves are glossy, light or dark green colored. They are alternately arranged on the branches.

Squeeze some lime juice onto an avocado quarter and eat as is.

In cooking, lime is valued both for the acidity of its juice and the floral aroma of its zest. It is a common ingredient in authentic Mexican, Vietnamese and Thai dishes.
Lime has shrub-like appearance due to multiple, irregular branches with numerous short twigs. Some types of lime are spiny.

Lime soup is a traditional dish from the Mexican state of Yucatan.

Lime pickles are an integral part of Indian cuisine. They are sometimes eaten alone, as a snack. They are also an ingredient in the preparation of some sweet relishes.

In Australia, desert lime is used for making marmalade.

All well-made cocktails are meant to bring out many different flavors on your palate. Just think about some of the best cocktails you’ve had — many have a punch of sour, which adds a deep, bright flavor. The secret? Often lime juice — it’s not just a garnish on the rim of the glass. Without lime, some of the most popular and classic cocktails would fall flat (lime juice is key in the margarita, the Mojito and the gimlet). It helps balance a drink and downplay the strength of the alcohol, which usually means you end up drinking more in the end!

Lime is small tree that usually grows to the height of 16 feet.

Limes are available in the marketplace throughout the year, although they are usually in greater supply from mid-spring through mid-fall.

Limes can be kept out at room temperature where they will stay fresh for up to one week. It can be stored in the refrigerator crisper, wrapped in a loosely sealed plastic bag, where they will keep fresh for about 10-14 days.

India is the top producer of limes; it is followed by Mexico and China.

To prevent scurvy during the 19th century, British sailors were issued a daily allowance of citrus, such as lemon, and later switched to lime. The use of citrus was initially a closely guarded military secret, as scurvy was a common scourge of various national navies, and the ability to remain at sea for lengthy periods without contracting the disorder was a huge benefit for the military. The British sailor thus acquired the nickname, “Limey” because of their usage of limes.