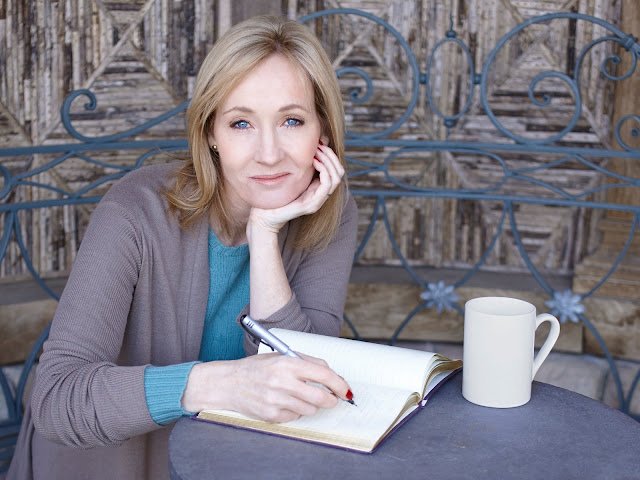 Joanne "Jo" Rowling (born 31 July 1965), who writes under the pen name J. K. Rowling, is a British author, best known as the creator of the Harry Potter fantasy series, the idea for which was conceived whilst on a train trip from Manchester to London in 1990. The Potter books have gained worldwide attention, won multiple awards, and sold more than 400 million copies

After the marriage ended she returned to England, with three chapters of the first Harry Potter book complete.

Joanne Kathleen (Kathleen is her favorite Grandma's name and is not actually her middle name) Rowling, brain behind the world famous "Harry Potter" lived in Chipping Sodbury from an early age and was born on July 31st 1965.

J. K. Rowling was financially poor for a time, living on welfare. It was during this time that she completed the manuscript for the first Harry Potter book.

JK Rowling wrote her first story at the age of six it was about a rabbit who gets the measles.

J. K. Rowling did not publish under her name Joanne Rowling because the publisher thought boys might not buy a book written by a woman. Her name was shortened to J. and the K. was added even though she had no middle name. The letter K was chosen because Joanne's grandmother's name was Kathleen.

From an early age all she ever wanted to do was write. She wrote her first book when she was 6 years old, called Rabbit but never finished anything.

The second book, Harry Potter and the Chamber of Secrets became No. 1 in adult hardcovers within 30 days of publication in July 1998.

At present, she lives in Edinburgh, Scotland with her daughter Jessica, now age seven.

In July 1999 Harry Potter and the Prisoner of Azkaban was published and became a bestseller as quickly as the second book had the year before.

She moved twice while growing up. The first move was from Yate to Winterbourne, just outside Bristol. In Winterbourne she was friends with a brother and sister whose surname was Potter. She says she always liked the name, and preferred it to her own because the children always made annoying jokes about rolling pins!

The second move was when she was nine years old. Her family moved to Tutshill near Chepstow in the Forest of Dean. After attending Tutshill Primary School, she went to Wyedean Comprehensive School.. She describes herself as having been 'quite freckly, short-sighted and rubbish at sports'. Her favorite subject was English and foreign languages. At her school in Chepstow, Monmouthshire, she passed all her exams and was made head-girl. Her parents wanted her to be involved with foreign languages. She studied languages, more notably French, and Classics at Exeter university and became a French teacher. She still pursued her writing though in her spare time.

J. K. Rowling wrote two more Harry Potter volumes titled Quidditch Through the Ages, and Fantastic Beasts and Where to Find Them. The proceeds went to Comic Relief after being published in 2001.

In 1990, at the age of 26, she moved to Portugal to teach English. She says that she loved teaching English. She taught in the afternoons and evenings, leaving the mornings free for writing. At this time she was starting work on her third novel (the first two were never finished because she says they were 'very bad'). The new book was about a boy who found out he was a wizard and was sent off to wizard school.

Because of J. K. Rowling's contribution to children's literature she has won several awards including the Prince of Asturias Award for Concord, the Hans Christian Anderson Literature Award, and France's Légion d'Honneur.

While in Portugal she met and married Portuguese journalist, Jorge Artantes. Their daughter, Jessica, was born in 1993. After her marriage ended in divorce, Rowling and her daughter moved to Edinburgh, Scotland, to be close to her younger sister, Di.

She began the first Harry Potter book in 1990, it was finished in 1995 and it was finally published in 1997. Some publishing companies would not accept it until Bloomsbury took her on. Before she tried to get the first book published she mapped out the first seven books to get an idea of the events to come. J.K Rowling has made around millions from the series and they are her only published works.

J. K. Rowling writes under a pseudonym Robert Galbraith. The first book was a crime novel titled The Cuckoo's Calling (2013). A second crime novel under her pseudonym is in the works.

The Scottish Arts Council gave her a grant to finish the book and, after a number of rejections, she eventually sold Harry Potter and The Philosopher's Stone $4,000 to Bloomsbury Publishing Company.

In 2001 J. K. Rowling married Neil Murray. She has two daughters and one son.

The book was published in the UK by Bloomsbury Children's Books in June 1997 (at the time of writing 1st editions of this book are on the market for upwards of 12,000 UK pounds/ USA $20,000!). Thereafter the accolades began to pile up. Harry Potter won The British Book Awards Children's Book of the Year, and the Smarties Prize.

J. K. Rowling established the Volant Charitable Trust in 2000. It has a budget of 5.1 million pounds and is meant to help combat child poverty as well as social inequality.

In the USA, the title of the book was changed to Harry Potter and the Sorcerer's Stone. The book was published in the USA in September 1998 by Arthur A. Levine Books/Scholastic Press.

In 1997 she got her big break with Harry Potter and the Philosopher’s Stone, which won the 1997 Smarties Gold Award. It immediately topped the British and American charts and J.K. Rowling earned enough money to quit teaching and write full-time. She then had success with the second installment of Harry Potter, Harry Potter and the Chamber of Secrets. This won the 1998 Smarties Gold Award. The 3rd book, Harry Potter and the Prisoner of Azkaban was also a huge success for J.K. Rowling. The 4th book was released on July 8th 2000, and has been one of the eagerly anticipated books of the year. Records have been broke for the number of books printed and sold on the first day of release.

By Summer 2000, the first three books had sold over 35 million copies in 45 languages and earned approximately $480 million.

In July 2000, Harry Potter and the Goblet of Fire had a first printing of 5.3 million copies with advance orders of over 1.8 million.

This book of course is Harry Potter and the Goblet of Fire. She is to produce 2 more books in the Harry Potter series, one for each of the years Harry has remaining at Hogwarts. The fifth book, Harry Potter and the Order of the Phoenix, was released on June 21st 2003 and was even more anticipated than the last. Over 200 million copies have now been sold of all the books in over 200 countries and in 55 languages. There is no release day at the moment for the sixth book.

For a brief period J. K. Rowling taught English in Portugal. There she met her first husband, and had a child.

One joy of Rowling is not the originality of her ideas -- there are plenty of other novels with boy wizards and boarding schools -- but what she does with them. This is the story of an ethnic community in which everyone knows everyone else and where enmities formed at school are still there years later. The adult characters are every bit as interesting as the young protagonists and she constantly reminds you that they, too, were once children. Apart from a few over-the-top caricatures, such as the Dursleys, most of the characters, adult and child alike, are three-dimensional. In this one, even Aunt Petunia is presented more sympathetically than usual.

Another delight is that in the midst of Wizard World War II, there is normal teen angst -- exams, friendships, the opposite sex (Harry gets his first kiss), who's on the team, who's going out with whom.

She will be 39 years old this July and married Dr Neil Murray on Boxing Day 2001 at their home in Killiechassie House, Aberfeldy. Seven-bed roomed Killiechasse House has an estimated value of £1.5 million, it's own library (understandably) and a self-contained house in it's west wing. Jo also owns a London property in trendy Kensignton. She has one younger sister, Di, who is her biggest fan along with her daughter, Jessica, aged 10. She previously lived with Jessica in Edinburgh, having first moved there in 1993. Jo and Neil celebrated an addition to their family, when on March 23rd 2003, Jo gave birth to David Gordon Rowling-Murray at an Edinburgh hospital.

JK Rowling reveals that Her favorite passage from the books is the chapter on the Mirror of Erised in Philosopher's Stone and the ending of Goblet of Fire is the part that she is most proud of. Her favorite book though is Chamber of Secrets but she thought Prisoner of Azkaban was the most fun to write.

J. K. Rowling's net worth is estimated at more than $1 billion, with the majority of her money coming from the Harry Potter series and movies.

Though the seeds of Harry had been sown as early as 1990, Rowling didn't put all of the pieces together and start writing in earnest until the mid-1990s when she was living in Edinburgh, Scotland, raising her daughter, Jessica, alone. Not able to afford even a used typewriter -- let alone a computer -- Rowling wrote the earliest drafts of Harry Potter and the Sorcerer's Stone in longhand. "I knew I wanted to get published. And, in truth, writing novels is something you have to believe in to keep going. It's a fairly thankless job when no one is paying you to do it. And you don't really know if it's ever going to get into the bookshops so I really did believe in it. But I was also very realistic. I knew the odds were not on my side because, an unknown author, you know? It's tough. It's tough the first time to get published, so I persevered. I loved writing it and I felt that I just had to try."

The author has encouragement for others who would follow her path. "My feeling is, if you really want to do it, you will do it. You will find the time. And it might not be much time, but you'll make it. Obviously if you have homework or other activities, you're not going to have huge amounts of time but if you really want to, you'll do it."

About her own writing, Rowling says that, in some ways, she just writes what she sees in her mind. "I have a very visual imagination. I see a situation and then I try to describe it as vividly as I can. And I do love writing dialog. Dialog comes to me as though I'm just overhearing a conversation."