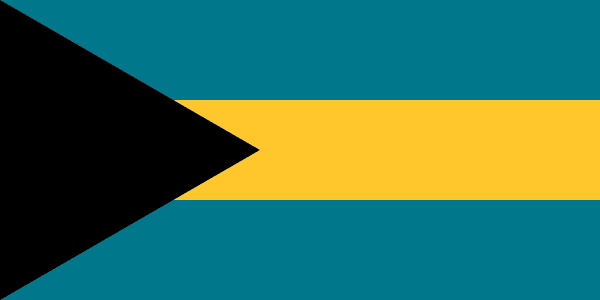 The Bahamas Listeni is an archipelagic state of the Lucayan Archipelago consisting of more than 700 islands, cays, and islets in the Atlantic Ocean.

The flamingo is the national bird of the Bahamas. Because of extreme hunting and attempts to take them off the islands, they became an endangered species. Today they are protected.

The official name of the country is the Commonwealth of the Bahamas.

The blue marlin is the national fish of the Bahamas. The famous writer Ernest Hemingway wrote about the fish in The Old Man and the Sea, one of his famous novels.

The Bahamas are extremely vulnerable to hurricanes because of their location, especially in the spring and fall months.

The official language is English.

The Bahamas economy was once reliant on agriculture and fishing. Today the Bahamas' economy has diversified into tourism, shipping and financial services.

The monetary unit in the Bahamas is the Bahamian dollar.

The Bahamas are one the Caribbean's richest countries. Half of those in the Bahamas work in tourism, followed by 17% in the financial services sector.

The Lignum Vitae is the national tree of the Bahamas, and is also a potentially endangered species.

There are no poisonous snakes in the Bahamas, but there are iguanas, parrots, wild horses, goats and pigs living there.

Of more than 700 islands only about 30 of the islands are inhabited. Andros Island, the largest islands of The Bahamas, has an area greater than all the other Bahamian islands combined. The most important island is New Providence on which the capital, Nassau, is situated.

The national sport in the Bahamas is sloop sailing.

Nassau is the capital and largest city of the Bahamas. It has has an attractive harbour, a colourful blend of old world and colonial architecture, and a busy port. More than two-thirds of Bahamian population live in Nassau.

The national flower of the Bahamas is the yellow elder. This flower is believed to helpful in fighting diabetes, as well as digestive issues.

The culture in the Bahamas is rich in legend, folklore, tradition and belief.

The famous Paradise Island of the Bahamas was originally called Hog Island. The island is located just off the shore of the city of Nassau, which is itself located on the northern edge of the island of New Providence. It is best known for the sprawling resort Atlantis with its extensive water park rides, pools, beach, restaurants, walk-in aquarium and casinos.

There are more than 315 days of sunshine in the Bahamas each year.

Mount Alvernia, located on Cat Island, is the highest point in the Bahamas. It sits at 200 feet in height.

Mount Alvernia (formerly Como Hill) is located on Cat Island in the Bahamas and is the highest point in the country at 63 meters (207 feet) above sea level. The small, stone, medieval-style monastery sits on the peak of Mount Alvernia.

The sand beaches in the Bahamas are pink because of the broken seashells that have become mixed into the sand.

The Bahamas has the clearest waters in the world, with visibility of over 61 meters (200 feet). It has been scientifically proven that a specific alga, which requires light to live, is found deeper in the Bahamas than anywhere else on earth.

Although an independent nation, the Bahamas recognizes Queen Elizabeth II as the Head of State.

The Bahamas is known for its stellar beaches. Many beaches have been voted “best in the world” by numerous publications.

The Bahamas are a parliamentary democracy.

The Islands of The Bahamas have 25 national parks and conservation areas, all under the care of the Bahamas National Trust.

Nassau is the capital city of the Bahamas.

The Lucayan National Park on Grand Bahama Island is the site of one of the longest known underwater cave systems in the world.

Approximately 60% of the population (248,948 people) living in the Bahamas lives in Nassau.

In the remote eastern edge of the Bahamas, the Exuma Cays Land and Sea Park is a “no take zone” and marine protected area, the first of its kind in the Caribbean. The park boasts some of the most striking seascapes in the Bahamas. The area is popular with divers and boaters, who come here for the quality anchorages, abundant marine life, and crystal clear waters.

The population in the Bahamas is approximately 307,000.

Dean’s Blue Hole is the world’s second deepest known salt water blue hole with an entrance below the sea level. It plunges 202 meters (663 feet) in a bay west of Clarence Town on Long Island.

There are 2,200 miles of coastline in the Bahamas.

The Andros Barrier Reef is the world’s sixth longest. It runs for 225 kilometers (142 miles), averaging a distance of 1.6-3.2 kilometers (1–2 miles) from the Andros shore.

The Bahamas encompasses an area of 5,358 square miles.

The Versailles Gardens on Paradise Island comprise a spectacularly lush multi-terraced landscape set in a rectangular design which is about 25 meters (82 feet) wide.

The Bahamas were the site of Columbus’ first landfall in the New World in 1492. At that time, the islands were inhabited by the Lucayan, a branch of the Arawakan-speaking Taino people.

The Golden Age of Piracy lasted from 1690 to 1720, and Nassau (the Bahamas capital) was at its heart, attracting the greatest concentration of pirates ever seen in the New World.

The Bahamas were once a favorite place for pirates to hide their treasure.

On July 10,1973 the Bahamas became an independent country from the United Kingdom.

As a parliamentary constitutional monarchy, the Bahamas is a member of the Commonwealth of Nations and is overseen by the British monarch.

The word Bahamas is derived from a Spanish word ‘baja mar' which means ‘low tide' or ‘shallow water or sea'.

The national sport of the Bahamas is sloop sailing.

By the terms of GDP per capita, the Bahamas is one of the richest countries in the Americas.

The Bahamas relies on tourism to generate most of its economic activity. Tourism as an industry not only accounts for over 60% of the Bahamian GDP, but provides jobs for more than half the country’s workforce.

Historically, a majority of the 5-6 million tourists visiting the Bahamas each year have been from the United States.

The Bahamas experiences about 310 days of sunshine each year.

In The Bahamas cars drive on the left side of the road.

Scenes from the original “Jaws” movie were filmed on a New Providence Island beach now known as “Jaws Beach”.
Share This