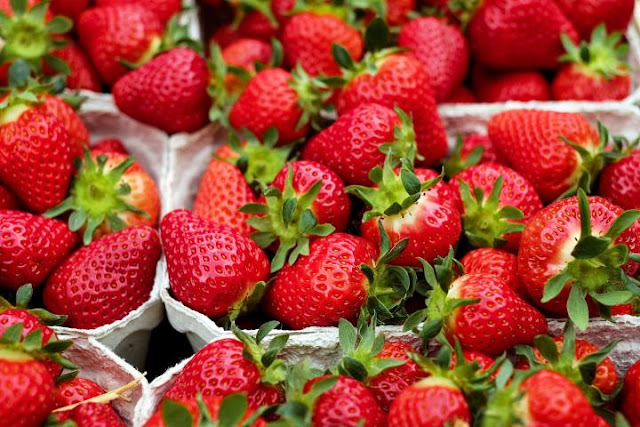 Strawberry’s botanical name is “Fragaria ananassa.” Don’t go by the name berry. It is an aggregate accessory fruit i.e. here the ovaries don’t form the fruit but some other part of the flower becomes fleshy and not one but many such fleshy parts combine to form strawberry.

They come from a plant called ‘fragaria’ and are members of the rose family.

Despite its name, the strawberry isn’t a true berry.

Technically, it is an aggregate accessory fruit, meaning that the fleshy part is derived not from the plant’s ovaries but from the receptacle (the thickened part of a stem) that holds the ovaries.

Strawberries are among the most beloved of fruits.

They come from a plant called ‘fragaria’ and are members of the rose family.

Despite its name, the strawberry isn’t a true berry.

As said it is an accessory fruit. To explain it more clearly it is a false fruit, the fleshy part you are eating is actually the stem of the plant.

Strawberry word has its origin from Old English words “steowberie” or “streawbelige”. There are many theories associated with the origin of the word.

Strawberry is a member of rose family and it is the only fruit which has seeds outside. It is the first fruit that ripens in the spring season.

Eat strawberries! It is good for your muscles, your brain, your heart, and it lowers BP, helps in preventing the development of cancer and even aids in improving cognitive processes.

Technically, it is an aggregate accessory fruit, meaning that the fleshy part is derived not from the plant’s ovaries but from the receptacle (the thickened part of a stem) that holds the ovaries.

Each apparent “seed” (achene) on the outside of the fruit is actually one of the ovaries of the flower, with a seed inside it.

The fruit is widely appreciated for its characteristic aroma, bright red color, juicy texture, and sweetness.

There are five basic anatomical structures that make up a strawberry plant’s being. They are the leaf, root system, crown, stolon (more commonly called a “runner”), and daughter strawberry plant.

The productive engine of a strawberry plant is contained within the crown. It is from this region that
strawberry plants produce both runners (stolons) and flowering fruit stalks that eventually yield strawberries.

There are about 200 seeds on an average strawberry.

Strawberry plants decline in quality and production after a few years so are typically replanted.

Strawberry plants tolerate almost any garden soil, but the richer the soil, the larger the crop will be.

Strawberry plants are divided into three categories: June-bearing, which produce the most flavorful berries; everbearing, which typically provide two main crops each year; and day neutral, which flower and fruit consistently throughout the summer.

Strawberry shapes vary from oblate to conic to necked or wedge, and cultivars can produce strawberries of different shapes depending upon the climate in which they’re grown. he type of cultivar appropriate for a particular environment depends upon preference and growing conditions.

It is even good for pregnant women. Birth defects like spina bifida (a condition where foetus’s spinal cord doesn’t develop properly) can be significantly reduced if they consume strawberries on a regular basis.

Strawberries contain more vitamin C than oranges and they help in reducing inflammations. They are great even for treating cataracts and other eye diseases.

Romans loved strawberries and not just for its taste. They believed that it could cure melancholy, fever, bad breath, chronic fainting, and spleen and liver disorders.

Not just that, during medieval times it was believed that serving strawberries at important ceremonies would bring peace and prosperity.

The harvesting and cleaning process has not changed substantially over time. The delicate strawberries
are still harvested by hand.

Unlike some other fruits, strawberries don’t continue to ripen after being picked.

The impressive polyphenolic and antioxidant content of strawberries make them good for improving the immune system, preventing against various types of cancers and for reducing the signs of premature aging.

Strawberries are rich in antioxidants. In addition to antioxidants, they have many other nutrients, vitamins, and minerals that contribute to overall health. These include folate, potassium, manganese, dietary fiber, and magnesium. It is also extremely high in vitamin C!

Strawberries are eaten either fresh or in such prepared foods as preserves, fruit juice, pies, ice creams, milkshakes and chocolates.

In Greece, strawberries are usually sprinkled with sugar and then dipped in Metaxa, a famous brandy,
and served as a dessert.

American Indians made corn bread with crushed strawberries and cornmeal and this is how it was introduced to Colonists. This served as an inspiration for Colonists to make strawberry shortcake.

Strawberries have aphrodisiac properties. Newlywed couples of France consume a soup made of strawberries for morning meal.

There are few foods whose entire genome is mapped. Strawberry is in this coveted group. It took 75 researchers and 38 research institute’s efforts to map the genome of strawberry.

Though strawberries are propagated through seeds but it is mostly done through runners.

There is a museum dedicated to strawberries alone in Belgium.

Strawberries and cream is a popular dessert during the British summer, famously consumed at the
Wimbledon tennis tournament.

In Italy, strawberries have been used for various desserts and as a popular flavoring for gelato (gelato alla fragola)

It is believed that Strawberry Shortcake was developed by the colonists by modifying an Indian recipe that created “strawberry bread” by mixing and then baking crushed strawberries with cornmeal.

While the origins of strawberry plants are widely unknown, they are thought to be indigenous to North and South America as well as Europe and Asia.

The strawberry fruit was mentioned in ancient Roman literature in reference to its medicinal use.

Strawberries are some of the first fruits to ripen in North and South America where they have been
enjoyed by indigenous peoples for hundreds, if not thousands of years.

The French began taking the strawberry from the forest to their gardens for harvest in the 14th century.

The Mapuche and Huilliche Indians of Chile cultivated the female strawberry species until 1551 when
the Spanish came to conquer the land.

The garden strawberry was first bred in Brittany, France in the 1750s by crossing a Gragaria virginiana, from North America, with a Gradaria chiloensis, from Chile. Prior to this, wild strawberries and cultivated selections from wild strawberry species were the common source of the fruit.

According to the U.S. Department of Agriculture, Americans eat an average of 1.54 kilograms (3.4 pounds) of fresh strawberries every year.

California produces 75 percent of strawberry crops in the U.S.

Although strawberries have so many health benefits few people are allergic to it and the allergy may vary from being mild to severe like anaphylactic shock which is a grave allergic reaction.

According to a legend, if you cut a double strawberry into two and share the other part with the opposite gender, you would soon fall in love.

California produces many strawberries annually, how many you may wonder. If you place those strawberries side by side they would encircle the earth 15 times!

Strawberries are grown in every single U.S. state and Canadian province.

There is a museum in Belgium dedicated to strawberries. In the gift shop at Le Musée de la Fraise
(The Strawberry Museum), you can buy everything from strawberry jam to strawberry beer.

Ladies note this point. It helps in reducing weight too, especially your abdominal fat. Just sprinkle pepper over sliced strawberries and have them. It keeps your teeth white. Aren’t you falling in love with strawberries?

A royal lady of Napoleon’s court by name Madame Tallien used to bathe with fresh strawberry juice once a year. One-time bathing took 22 pounds of strawberries.