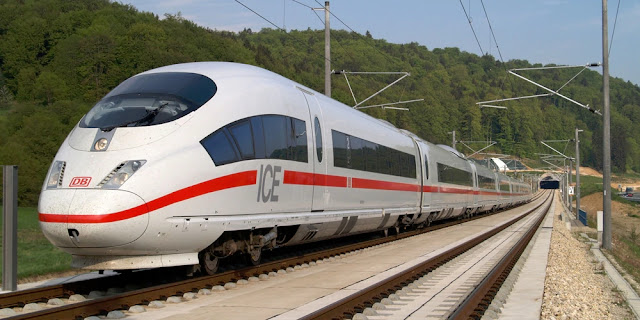 Trains are built to transport passengers or cargo along rail tracks.

Trains can be powered by a variety of energy sources including steam, diesel and electricity.

The development of the steam locomotive in the early 19th century transformed the world, carrying people and goods at unprecedented speeds around the globe.A steam locomotive generally burned coal in a furnace, or “firebox” and the fire heated water in a boiler to make steam.The steam was fed into cylinders to drive movable roads called pistons, and motion of the pistons was used to turn the wheels.

The use of steam locomotives developed through the 19th century.By the 1930s, they had become very popular.From the 1940s to the 1960s, electric and diesel trains replaced steam power in many countries.An electric locomotive uses electric motors to drive wheels.

Diesel locomotives entered service after World War I.Together with electric locomotives, they gradually brought the age of steam trains to an end.In a diesel locomotive, the power comes from an engine that burns diesel oil.

The world’s fastest magnetic-levitation train used commercially is in Shanghai, China, and reaches speeds up to 431 kph (288 mph).

Trans-Siberian Railway at 9300 km (5,778 miles) ~ Moscow-Vladivostok ~ it is the longest direct rail route in the world, and entirely within Russia.It takes a minimum of a week to traverse that distance by train.

It is possible to travel from Portugal to Vietnam solely by train. At 17,000 km (10,560 miles), this is the longest train journey in the world.

You may have heard of Thomas the Tank Engine, a popular character from British television and literature. Thomas is a small steam locomotive who starred in the children’s television series with a variety of other railway friends.

Ore trains in Sweden traveling down to the coast generate five times the amount of electricity they use,
powering nearby towns and the return trip for other trains.

In Japan, trains are so punctual that any delay over five minutes usually incurs an apology and a “delay certificate” for passengers on their way to work. When trains are delayed for an hour or more, it may even make the news.

In Moscow, stray dogs have learned to commute from the suburbs to the city. They reach the city, scavenge for food, then catch the train home in the evening.

There are many train enthusiasts around the world interested in everything from rail history to famous train journeys, model trains, railway photography and other hobbies related to railways.

Hogwarts Express Train used in the Harry Potter movies is an actually train that runs even today in Scotland. The line winds through gorgeous settings, including highland valleys and besides lochs.

Monorails feature a single rail and are often elevated above ground.