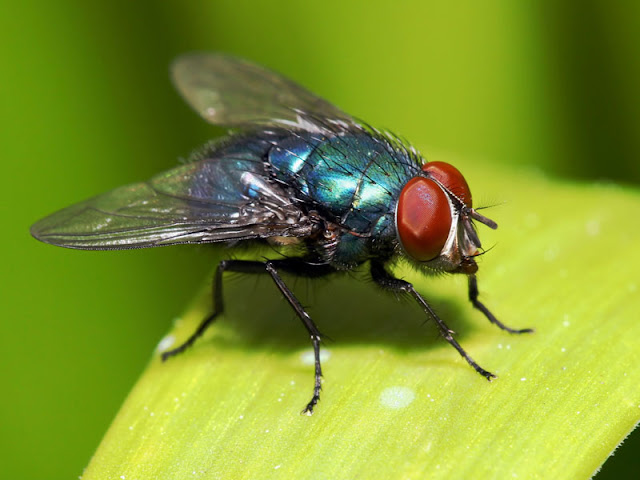 Flies are insects that belong to the order Diptera, the name being derived from the Greek δι- di- “two”, and πτερόν pteron “wings”.

There are approximately 125,000 species of flies that have been described by science. The actual number of species in the world is likely to be much larger.

They include many familiar insects such as house flies, blow flies, mosquitoes, gnats, black flies, midges and fruit flies.

Flies are often abundant and are found in almost all terrestrial habitats in the world apart from Antarctica.

Most flies live less then a year. Many fly species survive the winter only as eggs. Others survive as pupae, and a few survive as larvae or adults. Unless they hibernate, adult flies don’t usually live very long, often only a month or two, and sometimes just few days or weeks. Flies usually spend most of their lives as a larva or a pupa.

Flies are relatively small soft-bodied insects; most are less than 1.5 cm (0.6 in) long.

Gauromydas heros [photo below], with a length of up to 7 cm (2.8 in), is generally considered to be the largest fly in the world, while the smallest is Euryplatea nanaknihali, which at 0.4 mm (0.016 in) is smaller than a grain of salt.

Flies are adapted for aerial movement and typically have short and streamlined bodies.

They have only one pair of wings, unlike other insects. The second pair has evolved into advanced mechanosensory organs known as halteres, which act as high speed sensors of rotational movement and allow dipterans to perform advanced aerobatics.

Their wing arrangement gives them great maneuverability in flight, and claws and pads on their feet enable them to cling to smooth surfaces.

Flies have a mobile head with a pair of large compound eyes on the sides of the head, and in most species, three small ocelli on the top. Their compound eyes allow flies to see almost 360 degrees at once.

Flies use vision more than most insects do. They also sometimes detect the vibrations of wingbeats. Like all insects, they use their sense of smell a lot.

They look for food by tasting things with their feet and palps.

Flies feed on liquids and have either thin sucking mouthparts (like Mosquitos) or sponging mouthparts, a tube with wider sponge at the end (like Flower Flies and House Flies).

Adult flies often drink nectar. They also eat animal feces and decaying matter, including rotten fruits, vegetables and meats. When a fly finds food that’s solid, it rubs the food with bristles on its proboscis, a tubular appendage from its mouth. Then, the fly vomits a mixture of saliva and digestive juices onto the food. This breaks down the food and turns it into a liquid form. This is how they contaminate human food. Some female flies drink vertebrate blood, such as from mammals to get the protein they need for their eggs. A few adults are predators, they grab other insects, stab them with their mouthparts and suck out their blood and organs.

Many flies do most of their feeding as larvae. Some eat fungi or plants, especially fruit. Other species eat dead animals, and many eat dung. Some filter microscopic food particles from freshwater water. One big group of flies is parasitic. They lay their eggs inside or on insects and spiders, and the larvae feed on the inside of their host while it is still alive! A few species are parasites of vertebrates, such as mammals and birds, and get in wounds or under the skin.

Flies are usually active during the day when it is warmer and they can see as they fly. Fly larvae often feed continuously, day and night.

Flies have complete metamorphosis. Adult female flies lay eggs, and then small larvae hatch from the eggs. The larvae are often worm-like, and do not have jointed legs. They molt (shed their whole skin) several times as they grow. Then they transform into a pupa, which is a resting stage that transforms into an adult.

Flies have rapid reflexes that aid their escape from predators but their sustained flight speeds are usually low.

The horse-fly is the fastest flying insect, and has top speeds of around 145 km/h (90 mph).

The housefly, Musca domestica, is the most common fly species. It is probably the insect with the widest distribution in the world. the housefly is largely associated with man and has accompanied him around the globe.

Many flies mimic stinging insects such as wasps or bees, so predators will avoid them.

Flies are the second largest group of pollinators after the Hymenoptera (bees, wasps and relatives).

Flies play a variety of symbolic roles in different cultures. These include both positive and negative roles in religion. In the traditional Navajo religion, Big Fly is an important spirit being. In Christian demonology, Beelzebub is a demonic fly, the “Lord of the Flies”, and a god of the Philistines.

Flies appear in popular culture in concepts such as fly-on-the-wall documentary-making in film and television production.

Steven Spielberg’s 1993 film Jurassic Park relied on the idea that DNA could be preserved in the stomach contents of a blood-sucking fly fossilised in amber, though the mechanism has been discounted by scientists.

Flies have inspired the design of miniature flying robots.

NASA finds the common fruit fly — Drosophila melanogaster — quite an attractive “model,” but not in the way you might think. This tiny insect is a biomedical research model that can reveal the basis for health and disease in many animals, including humans, because we share the basic biochemical machinery of life. NASA scientists are studying fruit flies to understand the molecular, genetic, cellular and physiological responses of whole organisms to spaceflight. On Earth and in space, these models are easier to study than humans. Thousands of fruit flies take up little room. Multiple generations hatch within days, allowing for the study of diseases that would take decades to develop in humans.

Scaptia beyonceae is a species of horse fly found in the Atherton Tablelands in north-east Queensland, Australia Discovered in 1981 but not scientifically described until 2011, the fly is named after American recording artist and actress Beyoncé. It was so named thanks to it’s striking abdomen, which appears golden in color.