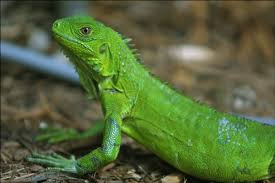 Some species of Iguana grow very quickly. They can be five times longer and a hundred times heavier in just for twenty-four months.

Average life span in the wild is 20 years; it is much shorter in captivity since many owners do not have the appropriate knowledge to take care of iguanas.

Iguanas can stay under water for 28 minutes.

Iguanas must be housed in cages which are at least 6 feet high and 12 feet wide and deep. The cages must be equipped with ultra violet light facility and a temperature of 70 - 80 ºC that helps them in digesting food.

These lizards are herbivores and hence should be fed with vegetarian diet only. They also draw water out of the food they eat, and hence can be fed with green beans, melons and strawberries. No animal protein supplements must be given.

Green iguanas are strict vegetarians. They do not eat, nor should they be fed, any animal protein. Some wild species do eat insects, however.

Rhubarb is poisonous to iguanas.

Like all animals, iguanas also show signs of aggression during mating season. During this period, they should be left along with their female partners until the mating season gets over.

Stuffed toys are also put inside the cages to play. They are social animals after all and like to nibble and chew whatever comes their way.

Small children should not be allowed near them as this reptile has sharp teeth and claws which might be used for self defense.

Iguanas are the largest in the lizard family. They laying eggs and are cold-blooded like many other reptiles.

Iguanas can drop 40 feet from a tree onto solid ground without getting hurt.

Airplanes in America collide with an average of 1 iguana every 2 years on runways (according to federal records).

An adult male is larger than its female counterpart and is more aggressive in nature. The stronger males dominate the weaker ones and demarcate their territories indicating their superiority. This is also a reason why these lizards are considered social animals.

Female iguanas usually produce eggs, even if there is not a male around.

Iguanas need to be handled every day to keep tame.

If an iguana’s tail is cut off, they can grow another one. Because of their tail’s weak vertebrae, often iguanas break their tail to escape after getting caught.

The tail makes up at least half the body length of an iguana.