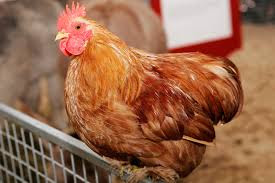 Chicken are pretty fast. The chicken can travel up to 9 miles per hour when it wants to.

The largest ever recorded chicken egg weighed nearly 12 ounces, and measured 12.25 inches around.

Chicken language has real meanings. The birds give different alarm calls depending on which type of predator is threatening them.

There are more chickens on Earth than there are humans.

Chickens can cross breed with turkeys. The result is called a 'Turkin'.

The greatest number of yolks ever found in a single chicken egg was nine!

Chickens experience REM (rapid eye movement) sleep. (I wonder what they dream about?)

There are over 150 varieties of domestic chickens.

Chickens are not capable of sustained flight.

The latin name for chicken is Gallus Domesticus.

Chickens come in an infinite variety of colors and patterns.

Chickens lay different colored eggs, from white, to brown, to green, to pink, to blue.

A chicken can have 4 or 5 toes on each foot.

A chicken takes 21 days to hatch.

Chickens were domesticated about 8000 years ago.

All domestic chickens can be genetically traced to Gallus Gallus, The Red Jungle Fowl.

The chicken was once considered a sacred animal symbolizing the sun.

Breeds were developed to provide plumage for ceremonial costumes.

A hen lives an average of 5-7 years, but can live up to 20 years. She'll lay eggs her entire life, with production decreasing every year from year one.

An egg starts growing into a chick when it reaches a temperature of 86 degrees F.

The chicken is the closest living relative of the tyrannosaurus-rex.

In Gainesville, Georgia, (the chicken capital of the world), a local ordinance makes it illegal to eat your chicken with a fork.

The waste produced by one chicken in its lifetime can supply enough electricity to run a 100 watt bulb for five hours.

The longest recorded distance flown by any chicken was 301.5 feet.

The record for laying the most eggs in one day was seven.

There are more chickens in the world than there are of any other domesticated bird. In fact, there's more than one chicken for every human on the face of this earth.

Chickens can fly, but not for long. The longest recorded flight of a chicken is only thirteen seconds.

A chicken will lay bigger and stronger eggs if you adjust the lighting in their cages to make them think each day is 28 hours long, instead of 24.

Chickens eggs come in colors sometimes, (other than white and brown). Some breeds lay eggs in shades of blue or green. Ready-made Easter Eggs!

The fear of chickens is called 'Alektorophobia'.