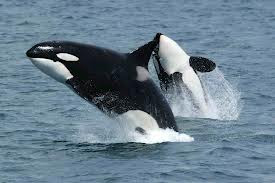 Whales belong to the order cetacean, meaning they are mammals that are fully adapted to aquatic life. Like dolphins and porpoises, whales are believed to have descended from land animals that returned to the water roughly 50 million years ago after living millions of years on land.

There are two suborders of whales to which all species of whales belong: toothed whales and baleen whales. Toothed whales include sperm, killer, and beluga whales, and they prey on large fish in deep waters as their main source of food. Baleen whales include blue and humpback whales, and they are filter feeders that feed on small organisms such as krill and plankton by straining large amounts of sea water through a comb-like structure in their mouth called a baleen.

Because whales must rise to the surface often to breathe, only one half of their brain sleeps at a time. This process allows their body to get adequate rest while still providing for the necessary function of breathing to survive.

Most etymologists believe the word “whale” comes from the High German word hwal, but it is also possible that it derived from the Old English word for “wheel” since the back of a whale rolling at the surface of the water resembles the rim of a large, submerged wheel.

Whales and other cetaceans move through the water by plunging their tails up and down in a vertical motion. This action distinguishes them from fish, which move their tails from side to side when swimming.

The blue whale is the largest of all whales and is also considered the largest animal to have ever existed in the world. An adult blue whale can measure up to 108 feet in length and can weigh nearly 200 tons.

When a blue whale dives into the water, its head is already deeper than most scuba divers dare to go before its tail leaves the surface of the water.

Sperm whales can dive as deep as two miles into the water, and their bodies have unique physiological adaptations to allow them to survive the intense cold and crushing pressure of these dives. They can limit circulation to the brain and other organs, slow the heart to 10 beats per minute to conserve oxygen, and collapse the lungs and rib cage to withstand pressure.

Prior to the invention of deep submersible boats, the sole source of knowledge about the ocean’s depths came from scientific examination of the stomach contents of sperm whales. The sperm whale often dives below 10,000 feet in pursuit of squid but must return to the surface in order to breathe.

“Fluking” is the term used for when a whale lifts its tail out of the water prior to making a deep dive. Because each whale species’ tail has unique features, fluking allows whale observers to identify species at a distance.

Whales do not drink seawater; instead, they extract water from their food by metabolizing the fat.

Biologists believe that whales (and modern hoofed animals) evolved from a group of extinct land mammals called mesonychid condylarths. The mesonychids resembled a slim wart hog without the tusks, according to renditions of the extinct species.

Scientists are not sure why whales jump out of the water, often called “breaching.” While early whalers thought breaching was a whale’s method of taunting the fishermen, many biologists now believe breaching is a whale’s way of demonstrating stamina and strength to prospective mates, which may be able to determine the energy of a breach from the sound and frequency of the splashes.

The humpback whale breaches more often than any other whale, sometimes leaving the water completely during a leap. The whale leaps by swimming quickly forward and then turning its spout suddenly upward to send its forward momentum skyward. This is quite a feat considering that a humpback whale can weigh as much as 30 tons.

Baleen whales use sonar to communicate with one another, emitting low-frequency sounds that can travel enormous distances under water. The bass notes uttered by baleen whales are the loudest natural noises made by any animal.

Whales have no natural predators aside from humans, who have hunted the large mammals for thousands of years for their meat and other raw materials. As early as 3000 B.C., Inuit populations hunted gray whales using only stones, driftwood, and the body parts of other animals as weapons.

Most species of toothed whales live in matrilineal pods, dominated by mothers, aunts, daughters, and sisters. Males typically stay with a pod for only a year or two after birth and then leave to visit other female pods to mate.

Because whales typically use hearing as their primary sense, they have very small eyes in proportion to their overall body size.

Legends exist in many cultures of whales that have saved the lives of fishermen and sailors. One such account came from whaler James Bartley. In 1891 he published his first-hand story of how he fell overboard from his ship, was immediately swallowed by a sperm whale, and then survived in the whale’s stomach for an hour while his shipmates caught and butchered the whale. Most modern experts dismiss the account as a hoax, arguing that a person could survive no more than a few minutes in the stomach of a whale.

While ancient fishermen used the meat of whales for food, in the modern era whales were primarily hunted for oil and whalebone, a term used for the baleen. Whalebone was used to make corsets, umbrella ribs, handles, and brushes, while the oil was used for cooking, candle wax and, much later, making margarine.

During the height of commercial whaling in the nineteenth and early twentieth centuries, the large baleen whales were the most highly sought after and, consequently, they now experience the lowest population levels. Of the 11 known species of baleen whales, nine are officially endangered with population numbers that are just a small fraction of what they were 100 years ago.

In 1986, the International Whaling Commission (IWC) declared a moratorium on commercial whaling in response to the severe depletion of many whale species. There are now only a few nations that practice commercial whaling.

The first whale species to be decimated to near extinction by the whaling industry was the right whale, so named because it was the “right” whale to catch for its relatively slow swimming speed, proximity to the shore, and high yield of oil and baleen.

Most toothed whales hunt their prey using echolocation by bouncing a clicking sound off of a nearby object, such as a squid, and measuring the distance by the amount of time it takes for the echo to travel back. In the dark depths of the ocean, hearing is their most vital sense.

A whale’s visible exhalation is typically called the blow or spout. Scientists believe that the visible mist in the air forming the spout is a combination of moisture condensed from the whale’s breath and mucous sprayed from the nasal passages.

One of the most famous books written about whales, Moby Dick by Herman Melville, features a whaler’s relentless hunt for an elusive white sperm whale. Rare albino sperm whales are often called Moby Dicks after the book’s title character.

The beluga whale is the only member of the cetacean order capable of facial expressions. The lips of the beluga and the crescent of fat that forms the forehead are both highly mobile, causing the whale to appear as if it were smiling or frowning at times.

The killer whale, or orca, is the fastest of all the whale species and among the swiftest of all marine animals with a capable swimming speed of 35 miles per hour. Only tuna, marlin, sailfish, and swordfish are faster.

Off the Pacific coast of British Columbia, killer whales often come to “rubbing beaches”—shallow bays lined with smooth rocks. The whales rub their bodies against the rocks, and scientists believe the action may be for no other reason than the sheer pleasure of it.

All killer whales are marked by defining patches of white on their black skin. While there is some regularity to the pattern of white patches, the markings are distinct enough among individual whales to allow them to distinguish between one another, even in murky water.

An adult hunchback whale may be the host to as many as half a ton of barnacles. In an attempt to remove the hitch-hiking barnacles and the drag they cause, whales slough off patches of skin continuously.

Gray whales were once known as “devilfish,” due to the ferocity with which a female gray whale will protect its young. While whalers would sometimes harpoon a humpback or bowhead calf in order to lure its mother to the same fate, the wrath of a mother gray whale was far too risky for such a trick. Enraged females were known to smash or overturn the whalers’ open boats in retaliation.

The blue whale can weigh over 200 tons but feeds exclusively on krill—a crustacean smaller than a child’s finger. The massive mammals gain much of their weight while they are nursed by their mothers, with a blue whale calf gaining approximately 250 pounds every day during its first three weeks of life.