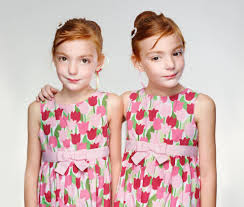 4.5 million twin individuals live in the United States today or about 2 percent of the general population.

Prematurity is a major reason multiples have a higher rate of birth defects and neonatal death.

Some thirty percent of multiples are born six weeks premature, or before 30 weeks of gestation. This figure is 10 times higher than their proportion in the population at large.

Nearly 25 percent of the twins born today are not expected until days or moments before their births.

For the second-born twin the mortality rate at birth and within the first month of life is twice that of the first born.

As a group twin individuals are at a higher than average risk for abuse (more than 9 times as often as the single child), neglect, physical disabilities, difficulties with speech and language development and social and emotional maladjustments.

The likelihood that you'll have twins is greater if there is a history of twins in your family. Fertility drugs also increase the incidence of twins because they often cause the release of more than one egg during ovulation.

Your doctor will diagnose a twin pregnancy by listening with a stethoscope to determine if there is more than one heartbeat, or by using ultrasound.

When you're pregnant with twins, you'll need to eat at least 2,700 calories each day. You'll probably be prescribed extra vitamins and minerals to take. Women pregnant with twins are more susceptible to anemia because more iron is needed to support the healthy growth of two fetuses. Your doctor will also prescribe enough folic acid for the healthy development of your twins.

With twins, you'll gain between 35 and 45 pounds by the end of your pregnancy. During the first half of pregnancy, your doctor will suggest you gain one pound a week. During the second half, you'll be encouraged to gain a bit more than a pound a week.

Because of the additional weight, twin pregnancies tend to be more uncomfortable. Get plenty of rest and put your feet up frequently to reduce swelling and leg pain.

Your doctor will likely monitor your twin pregnancy using techniques such as ultrasound (to check fetal heart rate, levels of amniotic fluid, and fetal growth), cervical exams (to rule out signs of preterm labor), and counting the babies' movements to make sure they are healthy and energetic.

Twin pregnancies have an increased risk of preterm labor, premature rupture of membranes, uneven growth, high blood pressure, preeclampsia, and diabetes. Your doctor will carefully monitor you for these conditions throughout your pregnancy.

You can certainly breastfeed twins, but you'll need at least 500 additional calories each day to keep up with the demands of producing the necessary breast milk. If you've had twins or are expecting them, be sure to meet with a lactation consultant for special support and advice.

Families who have multiple birth babies are themselves high psycho-social risk families. Coping with the stress of caring for them is one of the biggest challenges any family can face in the nineties. Divorce and abandonment of the mother and children is common. Other tragedies recently reported: two sets of twins died when their parents were unable to get them medical treatment in time. Worse yet, twice in the last year parents murdered their newborn twins, testifying they were overwhelmed by stress and sleep deprivation brought on by the care of the babies.

As American women put off their pregnancies until past their 30th birthday they are increasing their chances of having multiples.

Twin pregnancies in teenage mothers are extremely high risk due to maternal age and physiological development and their twins die approximately 20 percent of the time.

The use of fertility drugs, the increased use of in-vitro fertilization, and the use of contraceptive pills all influence the rise in the rate of multiple births.

More than 50 percent of the parents of multiples seeking help are low income or unemployed and 80 percent are members of racial and ethnic minorities.