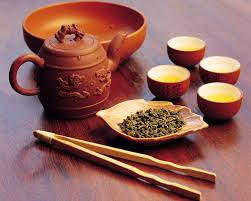 There is an estimated 1,500 different types of tea.

There are two different words for tea: te-derived (Min, a historical Chinese language) and cha-derived (Cantonese and Mandarin). The word a specific country uses for tea reveals where the country first acquired its tea.

Tea is the national drink in Iran and Afghanistan. Green tea is consumed as a thirst quencher, and black tea as a warming beverage. Both of them are prepared with lots of sugars.

Russians started drinking tea in the 17th century, but because of its high price, it did not become widely popular until the beginning of the 19th century. Tea in Russia has historically been prepared in a samovar, a heated metal container. The samovar keeps tea hot for hours.

The United Kingdom drinks about 165 million cups of tea a day, or 62 billion cups per year.

Britain is the second-largest nation of tea drinkers per capita. Ireland is the first.

In Morocco, it is the man’s job to pour the tea. He holds the long spouted pot high above the glass while pouring so that each glass of tea has a slightly frothy head to it.

It is widely believed that iced tea was invented in 1904 at the St. Louis World Fair by Richard Blechynden, a British tea merchant. However, at least one late 19th century cookbook includes a recipe for iced tea.

An estimated 85% of tea that is consumed in the United States is iced tea.

Over 519 million pounds of tea are imported into the United States each year.

Over 1.42 million pounds of tea are consumed in the U.S. every day.

In 2005, the total value of the worldwide tea market was over $20 billion.

Over 3 million tons of tea is produced every year worldwide.

Tea is the most widely consumed beverage in the world, after water.

Because tea absorbs moisture, it is important to store loose tea or tea bags in a tin or sealed jar.

While in older times it was customary to pour the milk first into a tea cup as a way to protect the surface of the china, tea connoisseurs say that is not necessary now. Instead it is better to pour the milk in after the tea because it is easier to judge how much is needed.

In 2011, Americans consumed over 65 billion servings of tea, which is approximately 3 billion gallons. An estimated 85% of all tea was black tea, 14% was green tea, and the rest was oolong and white teas.

In the United States, the South and Northeast have the greatest concentration of tea drinkers.

It takes around four to 12 years for a tea plant to produce seed. It takes about three years before a new plant is ready to harvest.

Tea plants need at least 50 inches of rain a year.

Most of the world’s tea is grown in mountain areas 3,000-7,000 feet above sea level and between the Tropic of Cancer and the Tropic of Capricorn. Tea-producing countries include Argentina, China, India, Indonesia, Kenya Malawi, Sri Lanka, and Tanzania.

Just the top 1 to 2 inches of a mature plant, or the flushes of the plant, are picked to make tea. A new flush grows within 7 to 15 days during growing season.

A tea plant can grow into a tree that is as tall as 52 feet if it its leaves are not harvested. Cultivated plants are usually pruned to waist height.

The Ritz Carlton of Hong Kong has the world’s most expensive High Tea meal, at a price of $8,888 per couple.

Boodles jewelers made a handcrafted diamond teabag worth $15,250. As the most expensive teabag in the world, it contains 280 diamonds and is being used to raise money for a children’s charity in Manchester, England.

The most expensive tea in the world is a rare Chinese tea called Tieguanyin, which is around $1,500/lb. The tea is named after the Buddhist deity Guan Yin (Iron Goddess of Mercy). It is an oolong tea.

Over 65% of tea brewed in the United States was prepared using tea bags.

According to legend, tea was discovered in 2737 B.C. by Chinese Emperor Shen-Ning, known as the “Divine Healer.” Purportedly, he discovered the beverage when tea leaves accidentally blew into his pot of boiling water.

The United States invented both the tea bag and iced tea in 1904. Many tea lovers consider the tea bag as one of the worst inventions of the 20th century. Tea brewed with loose tea is generally considered to be richer than tea made from bags.

More than 200 cups of tea can be brewed from one pound of loose tea leaves.

A cup of brewed tea usually contains less than half the caffeine of a cup of coffee. It’s also easy to decaffeinate loose tea at home by “rinsing” tea leaves. To rinse the leaves, begin brewing tea as usual and then remove the leaves after 20 seconds. Discard the brew and start again with fresh boiling water and the now-decaffeinated tea leaves.

One of Queen Victoria’s ladies in waiting, the Duchess of Bedford, is usually credited with the idea of “English Afternoon Tea.” The British invented two kinds of afternoon tea: “Low tea,” or afternoon tea served on a low “tea table,” and “high tea,” which is served on a “high” dining room table.

Black tea constitutes around 75% of the world’s tea consumption.

Black tea is the most common tea beverage in the United States, the U.K., and Europe. Green tea is popular in Japan and China. Oolong and white tea are in general less popular.

All tea is made from the leaf of the plant Camellia sinensis. The specific types of tea are made by processing the tea leaves differently.

White tea is the least processed type of tea. The most “fussy” type of tea is oolong tea.

In many parts of the world, tea is an important part of the day and an expression of hospitality.

When tea is being poured in China, guests tap two or three fingers on the table three times to show gratitude to the server.

Although tea arrived in England in 1657, it did not immediately become popular. First sold in coffee houses, tea was heavily taxed, illegally smuggled, altered, and fought over. It took many years for it to become a quintessential English drink.

Tea was initially sold in coffee houses in England. Only men were allowed to enter coffee houses, which were full of smoke and noise. Finally, in 1717, the Twining family opened the Golden Lyon, a teashop that allowed women. The shop is still open today, and the Twinings company is a prominent English marketer of tea.

At one time in the late 18th century, tea in Britain was predominantly imported through illegal methods. Smugglers would often mix tea (most often green tea) with other types of leaves and additives to increase their profits. Often these additives were poisonous. The British government intervened in 1785 and lowered taxes, which made tea more affordable and wiped out illegal smuggling activity.

In 1884, the Aerated Bread Company turned one of their unused rooms into a tearoom. The idea was extremely popular. Tearooms gave a woman a proper place to gather outside the house without a male escort and keep her reputation intact.

Although ready-to-drink teas and iced tea are increasing in popularity, they may not have the same polyphenol content as brewed hot tea, which has the highest polyphenol concentration.

The term “herbal tea” means that the tea has been infused with herbs or fruit that was not part of the tea plant. Herbal tea includes rosehip and chamomile teas.