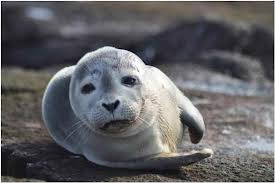 An adult seal can weigh from about130 lbs to more than 8,000 lbs depending on the species.

There are 32 known species of seals. The largest is the southern elephant seal which grow to 13 feet in length and the smallest is the Galapagos that grow to 4 feet in length.

Seals are found throughout the world from Polar Regions to tropical waters.

They do not have tear ducts. Seals look like they are crying when observed on land.

They have a layer of blubber under the skin that acts as insulators against the cold.

All seals have internal ears. Their body tapers from the chest towards a very short tail. The digits of the hands and feet are webbed and resemble paddles. These flippers help them steer and maneuver in water.

There are 33 species of seal world-wide, two of which live around Britain.

Scotland is an important breeding area for grey seals.

The grey seal population is estimated to be increasing by seven per cent a year.

Neither grey seals nor common seals are an endangered species.

Grey seals are larger than common seals, and have a distinctive profile.

Unlike whales and dolphins, seals give birth on land.

Seals are insulated from the cold by a thick layer of blubber.

Seals have sensitive whiskers that help them to detect prey in murky waters.

As soon as a pup is born, its mother forms a bond with it by smelling and calling to it.

Grey seals have been known to live for 46 years.

Some seal species have been hunted almost to extinction in some parts of the world.

In 1988 phocine distemper virus killed about 33 per cent of all common seals in the North Sea.

Oil spills are thought to cause breathing problems in seals, as well as damage to ears, nose and throat.

Seals are wild animals if approached too closely they will bite.

Seals are hunted for their fur, skins and their oil.

Seals eat fish, squid and meat and considered carnivores. They detect their prey though vibration by their whiskers.

They have more blood, per weight, than most other mammals. They are supplied with enough oxygen to help them to dive 1,000 feet in the ocean to find food.