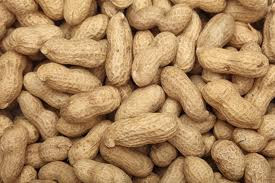 The peanut is not a nut, but a legume related to beans and lentils.

Peanuts account for two-thirds of all snack nuts consumed in the USA.

There are four types of peanuts grown in the USA — Runner, Virginia, Spanish and Valencia.

Four of the top 10 candy bars manufactured in the USA contain peanuts or peanut butter.

The average American consumes more than six pounds of peanuts and peanut butter products each year.

Peanuts are planted after the last frost in April or early May.

Dr. George Washington Carver researched and developed more than 300 uses for peanuts in the early 1900s; Dr. Carver is considered "The Father of the Peanut Industry" because of his extensive research and selfless dedication to promoting peanut production and products.

Astronaut Allen B. Sheppard brought a peanut with him to the moon.

Most USA peanut farms are family-owned and -operated.

As early as 1500 B.C., the Incans of Peru used peanuts as sacrificial offerings and entombed them with their mummies to aid in the spirit life.

Peanuts contribute more than $4 billion to the USA economy each year.

The peanut growth cycle from planting to harvest is about five months.

The average peanut farm is 100 acres.

Peanuts flower above ground and then migrate underground to reach maturity.

Two peanut farmers have been elected president of the USA - Thomas Jefferson and Jimmy Carter.

Adrian Finch of Australia holds the Guinness World Record for peanut throwing, launching the lovable legume 111 feet and 10 inches in 1999 to claim the record.

A mature peanut plant produces about 40 pods that then grow into peanuts.

Peanuts are a good source of folate, which can reduce the risk of certain birth defects in the brain and spinal cord.

Ever wonder where the term "Peanut Gallery" comes from? The term became popular in the late 19th century and referred to the rear or uppermost seats in a theater, which were also the cheapest seats. People seated in such a gallery were able to throw peanuts, a common food at theaters, at those seated below them. It also applied to the first row of seats in a movie theater, for the occupants of those seats could throw peanuts at the stage, stating their displeasure with the performance.

Besides being high in protein, peanuts are naturally cholesterol-free. They are also an excellent source of folate, meaning they have the ability to reduce the risk of some birth defects in the brain and spinal cord.

When snacking, you may think to recall that peanuts or peanut butter are ingredients in four of the top ten candy bars that the United States manufactures.

Each year, the average American consumes over six pounds of peanuts and peanut butter products.

More than $4 billion of the United States' economy each year comes from peanuts.

Talk about setting records! The world's largest reported peanut was four inches long. It was grown in North Carolina by Mr. Earl Adkins.

Thomas Jefferson and Jimmy Carter, what do they have in common? They were both peanut farmers who were elected as president of the United States.

Peanuts have traveld a long way and been in many places, South America (Africa), India and China, North America (the United States), and even the moon! Astronaut Allen B. Sheppard took a peanut with him on his trip to the moon.

Peanuts have come a long way from their original use of feeding pigs to becoming acounted for as two-thirds of all snack nuts consumed in the United States.

Chocolate manufacturers use 20% of the worlds peanuts (2008).

Dr. George Washington Carver researched and developed more than 300 uses for peanuts in the early 1900s; Dr. Carver is considered "The Father of the Peanut Industry" because of his extensive research and selfless dedication to promoting peanut production and products.

Adrian Finch of Australia holds the Guinness World Record for peanut throwing, launching a peanut 111 feet and 10 inches in 1999 to claim the record.

Peanuts originated in South America, where they were cultivated by Indians for at least 2000 years. As early as 1500 B.C., the Incans of Peru used peanuts as sacrificial offerings and entombed them with their mummies to aid in the spirit life.

Though there are several varieties of peanut, the two most popular are the Virginia and the Spanish peanut. The Virginia peanut is larger and more oval in shape than the smaller, rounder Spanish peanut. Unshelled peanuts should have clean, unbroken shells and should not rattle when shaken.

The U.S. produces only about 6% of the world crop.

In the U.S., annual peanut production (about 1.5 million tons per year) often exceeds the production of beans and peas combined.

India & China together produce almost 2/3rds of the world crop.

Historically, the largest producer of peanuts in the world was India, but production in China overtook Indian production in the mid-1990s. For the period 1996 to 2000, China produced almost 40% of the world crop, and India almost 25%, with the U.S. in 3rd place with almost 6%

Worldwide, about 2/3rds of the peanut crop is processed for peanut oil.

20% of the world's peanut production is used in candy.

Peanut oil accounts for 8% of the worlds edible oil production.

Americans eat 3 pounds of peanut butter per person every year. That's about 700 million pounds, or enough to coat the floor of the Grand Canyon!

One acre of peanuts will make 30,000 peanut butter sandwiches.

One acre of peanut plants yields about 2,860 pounds of peanuts.

Two peanut farmers have been elected President of the United States: Thomas Jefferson and Jimmy Carter.

Peanuts are members of the pea family.

The official state crop of Georgia is the peanut. Georgia produces almost 1/2 of the total U.S. peanut crop. More than 50% of the crop goes to peanut butter production (2002).
Georgia is the largest producer of peanuts in the U.S.

The first peanuts grown in the United States were grown in Virginia.

Mr. Peanut was created by 13 year-old Antonio Gentile in a logo contest held by Planters in 1916. He won the grand prize of $5.00. His drawing of a peanut person with arms and crossed legs was refined by a professional illustrator who added the top hat, monocle, white gloves and cane.

What is supposedly the World's Largest Peanut is in Turner County. A 20 foot tall peanut, it is a monument to the importance of the peanut in Georgia history.