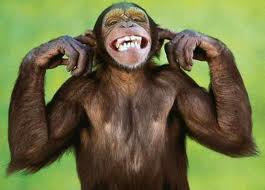 Monkeys make up two of the three groups of simian primates, Old World monkeys and New World monkeys. The other group is the apes.

A monkey is any primate that is not a human, prosimian, or ape.

Monkeys are most easily distinguished from apes by their tails. Apes have no tails.

Apes and spider monkeys swing arm-to-arm in trees, but most monkeys don’t. Instead, they run across branches.

Monkeys use vocalizations, facial expressions, and body movements to communicate.

Grinning or pulling the lip is a sign of aggression in monkeys, along with yawning, head bobbing, and jerking the head and shoulders forward.

Monkeys express affection and make peace with others by grooming each other.

A group of monkeys is called a "troop."

Monkeys are seriously threatened by habitat loss--especially those that live in tropical forests, a habitat that is quickly disappearing.

The Pygmy Marmoset is the world's smallest monkey. It measures 117-159 millimeters (four and a half to six inches) in length and weighs 85 to 140 grams (three to five ounces).

The male Mandrill is the largest monkey. It is almost 1 meter (3.3 feet) long and weighs about 35 kilograms (77 pounds).

It is common for monkeys to carry tuberculosis, hepatitis, and simian herpes B.

Most monkeys eat both animals and plants.a Some also eat dirt.

Monkeys peel their bananas and do not eat the skins.

Monkeys can grasp with both their fingers and their toes.

There are 96 species of Old World monkeys.

Old World monkeys often have large cheek pouches that enable them to feed rapidly and store their food, then chew and swallow it later.

As of 2008, there are 81 species of New World monkeys in the Amazon basin, and new ones are continually being discovered.

Many New World monkeys have prehensile tails, a feature not shared by any of their Old World cousins. Prehensile tails are used for grasping objects, swinging, and steadying the monkey by grasping limbs and branches when the hands and feet are being used in progression.

Many New World Monkeys, including the spider monkey, do not have thumbs. Capuchins and squirrel monkeys are the only New World monkeys with pseudo-opposable thumbs.

Proboscis monkeys are best known for the long noses of males, which grow larger as the monkeys age. Females have smaller, pointed noses. This distinctive feature might help to resonate the male's loud vocalizations.

As the name indicates, silvered leaf monkeys are silver to dark gray in color. Infants, however, are bright orange.

Twenty different vocalizations have been noted in squirrel monkeys.

Adult male guenon monkeys will sometimes rush after an eagle that has caught a family member, sometimes intimidating the bird enough that it lets go of its prey.

When a troop of guenon monkeys gets a new leader, the new alpha-male will sometimes kill all babies who are still being suckled—an evolutionary behavior known as kin selection, where the male protects his own offspring by killing the offspring of other males.

The Barbary Macaque is the only free-living species of monkey in Europe, which was once home to many monkeys.

The Olive Colobus monkey and certain Red Colobus species are hunted for food by humans and chimpanzees.

Howler monkeys are the loudest monkeys. Their howls can be heard for about two miles in the forest and almost three miles in an open area.

Howler monkeys spend up to 80% of their time resting.

South American Titi monkeys are rare among primates because they are monogamous. They mate for life and become distressed when separated. They show affection by remaining close, grooming each other, intertwining their tails, holding hands, nuzzling, cuddling, and lip smacking.

Capuchins are skilled tool users. They smash nuts with rocks, insert branches into crevices to capture food, remove spines and hairs from caterpillars by rubbing them against a branch, protect their hands with leaves, and use large branches to club snakes.

Capuchin monkeys use different vocal sounds to identify different types of predators. They have also been seen banging stones together to warn each other of approaching predators.