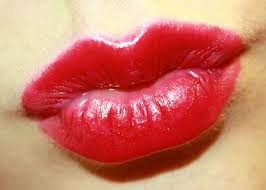 “Kiss” is from the Old English cyssan from the proto-Germanic kussijanan or kuss, which is probably based on the sound kissing can make.

A woman in China partially lost her hearing after her boyfriend reportedly ruptured her eardrum with a passionate kiss. Apparently, the kiss reduced the pressure in the mouth, pulled the eardrum out, and caused the breakdown of the ear.

The science of kissing is called philematology.

The insulting slang “kiss my ass” dates back at least to 1705.

Lips are 100 times more sensitive than the tips of the fingers. Not even genitals have as much sensitivity as lips.

Approximately two-thirds of people tip their head to the right when they kiss. Some scholars speculate this preference starts in the womb.

The most important muscle in kissing is the orbicularis oris, also known as the kissing muscle, which allows the lips to “pucker.”

French kissing involves all 34 muscles in the face. A pucker kiss involves only two.

The lips of both men and women resemble the lips of the vagina.

The term “French kiss” came into the English language around 1923 as a slur on the French culture which was thought to be overly concerned with sex. In France, it’s called a tongue kiss or soul kiss because if done right, it feels as if two souls are merging. In fact, several ancient cultures thought that mouth-to-mouth kissing mingled two lovers’ souls.

The Four Vedic Sanskrit texts (1500 B.C.) contain the first mention of a kiss in writing.

It is possible for a woman to reach an orgasm through kissing.

Mechanically speaking, kissing is almost identical to suckling. Some scholars speculate that the way a person kisses may reflect whether he or she was breastfed or bottle fed.

Scientists believe that kissing may be a way of exchanging body salts or sebum that form relationships with parents and lovers, just as it does some birds. During mating, some birds chew food, then kiss-feed it to a prospective mate. If a bird’s sebaceous glands are removed so there is no sebum, its mate flies off.

Kissing is good for teeth. The anticipation of a kiss increases the flow of saliva to the mouth, giving the teeth a plaque-dispersing bath.

A medieval manuscript warns Japanese men against deep kissing during the female orgasm because a woman might accidentally bite off part of her lover’s tongue.

The Kama (desire) Sutra (type of verse) lists over 30 types of kisses, such as “fighting of the tongue.”

According to one study, many men are more particular about which women they kissed than who they went to bed with, suggesting that kissing is somehow more about love than coitus is.

Kissing may have originated when mothers orally passed chewed solid food to their infants during weaning. Another theory suggests kissing evolved from prospective mates sniffing each others’ pheromones for biological compatibility.

Scholars are unsure if kissing is a learned or instinctual behavior. In some cultures in Africa and Asia, kissing does not seem to be practiced.

Leper-kissing became fashionable among medieval ascetics and religious nobility during the twelfth and thirteenth centuries. It was deemed proof of humility.

During the middle ages, witches' souls were supposed to be initiated into the rites of the Devil by a series of kisses, including kissing the Devil’s anus, which was a parody of kissing the Pope’s foot.

Pliny asserts that kissing a donkey’s nostril will cure the common cold.

Kissing at the conclusion of a wedding ceremony can be traced to ancient Roman tradition where a kiss was used to sign contract.

The first on-screen kiss was shot in 1896 by the Edison Company. Titled The May Irwin-John C. Rice Kiss, the film was 30 seconds long and consisted entirely of a man and a woman kissing close up.

The first on-screen kiss between two members of the same sex was in Cecil B. DeMille’s 1922 Manslaughter.

Under the Hays Code (1930-1968), people kissing in American films could no longer be horizontal; at least one had to be sitting or standing, not lying down. In addition, all on-screen married couples slept in twin beds...and if kissing on one of the beds occurred, at least one of the spouses had to have a foot on the floor.

Polls consistently list the kiss between Ingrid Bergman and Cary Grant in the 1946 film Notorious as one of the sexiest kisses in cinematic history. Because the Hays Code allowed on-screen kisses to last only a few seconds, Alfred Hitchcock directed Bergman and Grant to repeatedly kiss briefly while Grant was answering a telephone call. The kiss seems to go on and on but was never longer than a few seconds.

The film with the most kisses is Don Juan (1926) in which John Barrymore and Mary Astor share 127 kisses. The film with the longest kiss is Andy Warhol’s 1963 film Kiss. The 1961 film Splendor in the Grass, with Natalie Wood and Warren Beatty, made history for containing Hollywood’s first French kiss.

Early Christians kissed one another in highly specific settings that distinguished them from the non-Christian population. The earliest Christian reference to the ritual kiss is at the end of I Thessalonians: “Greet one another with a holy kiss.” The Christian ritual kiss or “kiss of peace” was used during prayer, Eucharist, baptism, ordination, and in connection with greeting, funerals, monastic vows, and martyrdom.

Kissing played an important role in ancient Greco-Roman culture and was seen as a sign of respect, thanks, reunion, and agreement, as well as as a rite of inclusion. Kisses were exchanged between peers, political leaders, teachers, and priests. Hence, the kiss of Judas (“Kiss of Death”) to betray Christ inverted the very point of kissing in this early Christian context.

Although many men and women consider it childish, more than 95% of them occasionally like to rub noses while kissing.b Often called an “Eskimo kiss” in Western culture, this form of kissing is based loosely on a traditional Inuit greeting called a “kunik."

In 1929, anthropologist Bronislaw Malinowski visited the Trobriand Islands to observe their sexual customs. He found that two lovers will go through several phases of sucking and biting in a variation of the French kiss that culminates in biting off each other’s eyelashes. In fact, in the South Pacific, short eyelashes are a status symbol.

Diseases which can be transmitted through kissing include mononucleosis (“kissing disease”) and herpes. Contraction of HIV through kissing is extremely unlikely, though one woman was infected in 1997 when the woman and infected man both had gum disease. Transmission was likely through the man’s blood and not his saliva.

Rodin’s famous statue The Kiss was originally titled Francesca da Rimini and depicts the thirteenth-century woman in Dante’s Inferno who falls in love with her husband’s younger brother Paolo. Their lips do not actually touch, hinting at their eventual doom.

The kiss of life (breath of God) and the kiss of death (Judas’ kiss) are powerful literary and artistic symbols. Sixteenth century authors were especially likely to use them as sexual metaphors.

The mouth is full of bacteria. When two people kiss, they exchange between 10 million and 1 billion bacteria.b
“X”s at the end of a correspondence letter represent the contact of the lips during a kiss.