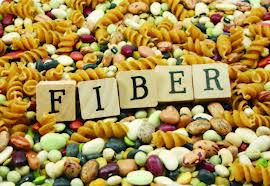 Fiber is a nondigestible, plant-derived carbohydrate that includes the storage and cell wall parts of the plant. Fiber passes through the human digestive tract essentially intact and has little to no caloric value.c
The “Father of Medicine,” Hippocrates (4th century B.C.) was one of the first physicians to argue for the benefits of fiber in the form bran to help keep the large intestine healthy.

In the 1830s, a Presbyterian minister and advocate of dietary reform, Rev. Sylvester Graham, argued that bran was the cure-all for the poor diet of his time. He created Graham flour, which is still used today.

The digestive tract is an amazing 28 feet long. Fiber helps move waste along this large muscle.

There are two types of fiber: soluble fiber, which dissolves in water, and insoluble fiber, which does not dissolve in water. Both types are important in maintaining optimal health. They occur naturally in foods such as beans, seeds, nuts, vegetables, fruits, and whole grains.

Insoluble fiber (“roughage” fiber) does not dissolve in water. It essentially acts like a sponge, capable of absorbing up to 15 times its own weight in water and making a person feel full longer.

Insoluble fiber attaches to waste in the body, which makes waste bulkier and easier to pass. This helps prevent hemorrhoids, heart disease, and some types of cancer.

Research shows that fiber can lower the risk of prostate cancer progression and decrease levels of testosterone, which helps decrease tumor growth.

Soluble fiber slows down the absorption of sugar and fats in the blood, which helps regulate blood sugar levels.

Soluble fiber binds with and removes cholesterol from the blood stream, which helps lower LDL, or “bad” cholesterol.

Traditionally, fibers have been categorized as insoluble or soluble. However, recent research shows that fiber’s solubility does not always define its health effects. It is expected that the descriptions of soluble or insoluble will be discouraged in the future.

Foods rich in fiber help prevent diverticulosis, which is the formation of intestinal pouches. Fiber contributes to the bulk of stool in the colon, which means less forceful contractions are needed to move the stool; therefore, intestinal pouches aren’t so readily formed.

If people who normally had low fiber suddenly doubled their intake, they could lower their risk of colon cancer by 40%.

Research indicates that fiber has protective effects against breast cancer.

The average amount of time it takes food to travel through the body in a healthy adult is about 3 days. For someone who is constipated, it’s 10 days. In the elderly, it takes 2 weeks. In countries where fiber content is high, such as in many third-world countries, it takes 1½ days. The longer it takes for stools to pass through the bowel, the higher the risk for developing gastrointestinal diseases, such as diverticular disease, ulcers, and colon cancer.

Fiber can help with overeating. Fiber takes longer to chew, which gives the body time to let a person know when he or she is full.

The more fiber a person includes in his or her diet, the more water he or she will need to keep the fiber moving through the digestive tract.

Too much fiber can cause negative health effects. For example, if a person eats more than 50 grams of fiber a day, he or she can start to suffer from diarrhea and bloating, which can interfere with the body’s absorption of other minerals.

While synonyms for fiber include “bulk” and “roughage,” they can be misleading because some forms of fiber are water soluble and aren’t bulky or rough at all.

Grains offer the most fiber. The best sources are whole grains and concentrated grain products. Choosing 100% whole-grain bread for a sandwich can add 3-5 grams of fiber per serving. Look for “whole grain” or “whole wheat” in the beginning of the ingredient list.

Whole wheat has nearly four times the fiber component of brown rice. Whole-grain foods contain all the components of the grain (bran, germ, and endosperm).

Fiber is sometimes referred to as “nature’s broom” because it helps “clean out” the intestinal tract.

Many types of soluble fiber can act as prebiotics that feed healthy gut bacteria which, in turn, contributes to colon health.

Scientists show that those who eat the most fiber have significantly lower risk of dying of any cause. The National Cancer institute concludes that for every 10-gram increase in fiber intake, risk of death drops 15% in women and 10% in men.

While products, such as cookies, crackers, drinks, sugary cereals, and ice cream have started to include fibers to make them appear more healthful, naturally occurring fiber typically has the best health benefits.

Physicians suggest that if a person is not currently eating enough fiber and would like to increase his or her fiber intake, he or she should increase it slowly to avoid gas and bloating.

The word “fiber” first entered the mainstream vocabulary in 1970s when the “Fiber Man,” Dr. Denis Burkitt, argued the “fiber hypothesis,” which states that fiber can prevent certain diseases. Burkitt and his colleagues found that common diseases in Western cultures (heart attacks, high blood pressure, obesity, hemorrhoids, colon cancer, and varicose veins) were not common in Africa. The primary dietary difference between the cultures was a high intake of fiber and low intake of refined carbs in Africa.

Historians note that the emergence of common diseases occurred in the U.S. and England after 1890, when a new milling technique removed fiber from whole-grain flour to produce white flour.

To determine how much fiber a child needs each day, take her age and divide it by 10. For example, a 7-year-old needs to eat about 0.7 ounces (17 g) of fiber every day.

A study at the University of Cardiff in the United Kingdom found that people who had higher levels of fiber intake had higher feelings of well-being.

Research shows that eating an additional 14 grams of fiber each day resulted in a 10% decrease in calorie intake. Additionally, long-term studies show that people who eat fiber rich foods tend to be slimmer than those who don’t.

A fiber-deficient diet can result in deadly colon cancer, which is the leading cause of cancer-related deaths in nonsmokers.

While the body does not digest or metabolize fiber like it does vitamins and minerals, it provides a “time release” of vitamins, minerals, fats, and sugars during digestion, which help optimize the their metabolism.

Symptoms of low fiber intake include unhealthy bowel movements, such as going less than two or three times a day. Additionally, a bowel movement should never hurt, cause hemorrhoids, or lead to bleeding.

One hundred years ago, meat, fat, and sugar between them contributed only 15% of the total number of calories in an average diet. Today, the figure in nearer to 60%. The quantity of fiber has dropped a whopping 90%.

The most common abdominal emergency in the West is appendicitis. Over 300,000 appendixes are removed each year in the United States. A low-fiber diet increases the risk of appendicitis.

Nutritionists suggest including at least one food product that is high in fiber during all your meals and snacks throughout the day to reach the recommended amount of daily fiber.