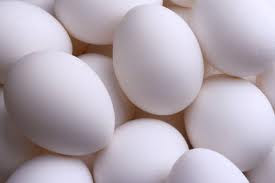 30 minutes later, she starts all over again.

The eggshell may have as many as 17,000 tiny pores over its surface. Through them, the egg can absorb flavours and odours.

Eggs age more in one day at room temperature than in one week in the refrigerator.

A hen requires 24 to 26 hours to produce an egg. Thirty minutes later, she starts all over again.

As a hen ages, her eggs increase in size. Small eggs come from young hens, while jumbo eggs are laid by older hens.

Occasionally, a hen will produce double-yolked eggs. It is rare, but not unusual, for a young hen to produce an egg with no yolk at all.

The little white ropey strands in an egg white are called “chalaza”. Their function is to anchor the yolk in the center of the egg. They are neither imperfections nor beginning embryos, and are completely safe to eat. In fact, the more prominent the chalazae, the fresher the egg!

Nobody really knows when the first fowl was domesticated, although Indian history places the date as early as 3200 B.C. Egyptian and Chinese records show that fowl were laying eggs for man in 1400 B.C. It is believed that Columbus' ships carried the first of the chickens related to those now in egg production to this country.

Yolk color depends on the diet of the hen. Natural yellow-orange substances such as marigold petals may be added to light-colored feeds to enhance colors. Artificial color additives are not permitted.

To tell if an egg is raw or hard-cooked, spin it! If the egg spins easily, it is hard-cooked but if it wobbles, it is raw.

If an egg is accidentally dropped on the floor, sprinkle it heavily with salt for easy clean up.

Egg yolks are one of the few foods that naturally contain Vitamin D.

Yolk colour depends on the diet of the hen. Natural yellow-orange substances such as marigold petals may be added to light-colored feeds to enhance colours. Artificial colour additives are not permitted.

Eggs are nutritious for many pets as well as humans and are often an important part of prepared pet food formulas. Eggs can improve animal fur and coat health and maintain eyesight.

The egg shell accounts for about 9 to l2% of its total weight.

The shell is largely composed of calcium carbonate (about 94%) with small amounts of magnesium carbonate, calcium phosphate and other organic matter including protein. Shell strength is greatly influenced by the minerals and vitamins in the hen's diet, particularly calcium, phosphorus, manganese and Vitamin D. If the diet is deficient in calcium, for instance, the hen will produce a thin or soft-shelled egg or possibly an egg with no shell at all.

Shell thickness is also related to egg size, which, in turn, is related to the hen's age. As the hen ages, egg size increases. The same amount of shell material which covers a smaller egg must be ‘stretched’ to cover a larger one, hence the shell is thinner.

Eggs are an important source of complete protein for vegetarians. One egg = 1 ounce of lean meat, fish or poultry.