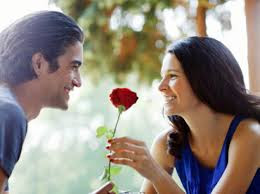 Couples usually wait until six to eight dates before they are willing to enter into an exclusive relationship.

Speed dating, invented by a rabbi from Los Angeles in 1999, is based on a Jewish tradition of chaperoned gatherings of young Jewish singles.

The most common time for breakups is around three to five months.

One in three teenagers have experienced violence in a dating relationship.

In a survey conducted by MSNBC.com and Elle magazine, more than 31% of men said they dumped an overweight partner compared to 12% of women.

On average, it takes between 12 to 14 dates before couples will trade house keys.

Women who post a photo on Internet dating sites receive twice as many email messages as women who don’t. The same study found that men who reported incomes higher than $250,000 received 156% more email than those with $50,000.

Match.com reports that 44% of its members in the United States have children.

On free dating sites, at least 10% of new accounts are from scammers.

If a man can’t decide what to wear on a date, he might want to wear blue. Studies show that women are attracted to men in blue.

Thirty-three percent of online daters form a relationship, 33% do not, and 33% give up.

The third week in September is National Singles Week in the U.S.

Researchers at the University of Chicago found that people were twice as likely to find a date through friends and family than through the bar scene.

Four out of 10 workplace dating relationships result in marriage.

Psychologists at the University of Pennsylvania studied data from over 10,000 speed daters and found that most people make a decision regarding a person’s attraction within three seconds of meeting.

One Manhattan matchmaker’s price begins at $20,000. If a match (marriage) results, a marriage bonus is expected.

At 4M Multimillionaire Matchmaking Club based in Seattle, WA, clients are men who have made millions but are still single. The matchmaking service charges between $10,000 and $30,000 for men. Women pay around $250 to be listed as potential partners.

Typically, dating specialists suggest waiting until the third date to cook someone dinner at home.m
Nearly 40% of men do not feel confident meeting a woman for the first time.

During the early twentieth century, dating evolved out of a courtship ritual where young women entertained male callers under the watch of a chaperone. By the 1960s and 1970s, “hooking up” increasingly replaced dating, mainly because the age at which people marry for the first time had begun creeping up.

Studies show that schools, colleges, coffee shops, and malls are all excellent places to flirt because people are more open to meeting others in these places. Poor locations are restaurants and movie theaters.

Studies show that before a man even speaks a word, the way he stands (whether he is slouching or not) counts for over 80% of woman’s first impression.

Studies show that happiness is contagious and that potential dates find it hard to walk away from happy people. One of the biggest turn-offs during a date is negativity.

Studies show that men are put off by groups of loud women. If a woman wants to get a date, she should break away from a loud group to give a man a chance to approach her.

Mirroring, or repeating someone’s body language, often impresses a date because it subtly conveys interest to the other person. One should avoid copying every move, however.

Body language studies show that revealing areas of the body that aren’t usually on display (such as the inner wrist, the inside of the upper arm, ankles, feet, inside calf muscle, and the nape of the neck) has an immediate effect on a date and shows an instant liking.

If you want to create an instant link with a date, say his or her name at least twice in the conversation. This shows attentiveness and connectiveness.

Studies show that remembering bits of information about a person and working them into conversations not only is highly flattering but also shows interest.

Bad breath and bad teeth are an instant turn-off for potential dates. If deep dental cleaning doesn’t improve a person’s breath, he or she could have a stomach bacterium called H. pylori, which causes bad breath.

Research has confirmed that women are more attracted to men who wear pheromone-based colognes or aftershaves such as 10X. Studies have also shown that women, who have a stronger sense of smell than men, are particularly attracted to musk and black licorice smells.

When a man first approaches a woman, she will base 55% of her initial impression of him on his appearance and body language, 38% on his style of speaking, and 7% on what he actually says.

If a group of women are standing together but their eyes are wandering, they are likely to be looking for guys. If they each take a turn to break away from the group to head to the bathroom alone, they are on the prowl. If they are huddled together giggling, they are usually not interested in finding men.

If a woman is interested in her date, she will often smile at his jokes, play with her hair, fidget with an object such as a glass, blush when he pays her a compliment, pout or pucker her mouth, stumble over words, or lean in towards him.

Signs that a woman is not interested in her date include avoiding eye contact, faking a smile or not smiling, leaning away, answering in monosyllables, sagging her shoulders, looking at her watch, tapping her foot, or staring blankly.

Beautiful women typically get more stares, winks, and harassment than average-looking women do, but they are also less likely to get asked out by average-looking men because those men tend to be intimated by them.

The appropriate time to call after meeting a man or woman is hotly debated among dating experts. Typically, the ideal time to wait to call is two to four days, though no longer than four to five days. Calling too soon can appear desperate.

Choosing exciting places for a first date increases the chances of the other person falling for you. There is a definitive link between danger and physical/romantic attraction.

Worst places to go on first date include fast-food restaurants, your kids’ birthday party or school play, your parents’ house, strip clubs, X-rated films or swingers parties, a party where your ex will be, church activities, or window shopping.

Dating specialists suggest that if a woman doesn’t return a call after two messages, she is not interested.

If a woman offers to pay for everything, chances are she isn’t that into the date. There’s an unspoken understanding that a man paying for everything is a form of “copulatory gift,” which is almost universal in all animal species.

Eye contact, or a “copulatory gaze,” is a primary and powerful tool for attracting a potential date for both men and women. However, the meaning of various types of eye contact differs from culture to culture.