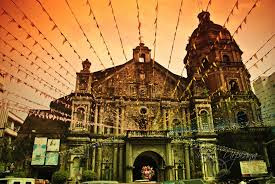 The word Catholic comes from the Greek phrase kath'holou.

Catholic relates to the historic doctrine and practice of the Western Church.

To avoid confusion between this concept and the Roman Catholic Church, above, theologians writing in English will refer to the former as the "Church catholic", using the lower-case.

A letter written by Ignatius of Antioch to Christians in Smyrna around 106 is the earliest surviving witness to the use of the term Catholic Church.

The first Mass in the English-speaking American colonies was held on Saint Clement's Island in Maryland on March 25, 1634, and was the beginning of the Archdiocese of Washington.

Mississippi is the most religious state in the U. S. and Vermonters are the least religious.

Savannah, once the capital of Georgia, was begun by Englishman James Oglethorpe and a 1732 Royal Charter as a colony which did not accept Catholics, rum, or slaves.

There are 2.2 million Catholics in Pakistan.

85% of the Philippines is Roman Catholic.

Olive trees were used for crucifixion.

There is no funeral mass during Holy Week.