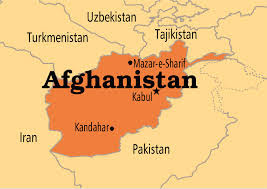 Afghanistan is a landlocked country in Central Asia. It shares its borders with Pakistan to the southeast, Iran to west, Turkmenistan, Uzbekistan, and Tajikistan to the north, and China to the northeast.

The climate of Afghanistan is very dry and seasonal, with temperatures varying by altitude.

Most of the precipitation that falls in Afghanistan comes in the form of winter snow. The nation-wide annual average is only 25-30 centimeters (10 to 12 inches), but snow drifts in the mountain valleys can reach depths of over 2 meters.

The desert experiences sandstorms, carried on winds moving at up to 177 kph (110 mph).

August 19 is celebrated as the National Day of Afghanistan. The Third Afghan War led to the sovereignty of Afghanistan. It began on May 6, 1919. It ended with the Treaty of Rawalpindi which was signed between Afghanistan and United Kingdom. On this day in 1919, King Amanullah Khan declared the nation a sovereign and fully independent state.

In 2010, the GDP of Afghanistan was $27.36 billion, while its GDP per capita was $900. Agriculture accounts for 78.6% of the GDP, followed by services: 15.7%, and industry: 5.7%. Unemployment rate stands at 35%, and 36% of the population live below poverty line. Major industries in the country are soap, furniture, shoes, fertilizers, apparel, food-products, natural gas, coal, and copper. Major trade flows are with Pakistan, India, Russia, Germany, Tajikistan, and United States. It exports opium, fruits and nuts, wool, cotton, hides, precious and semi-precious stones, while it imports capital goods, food, textiles, and most consumer goods.

The New Year in Afghanistan, called Nawroz, is celebrated on 21 March which is the first day of spring.

The official currency of Afghanistan is Afghani. Its ISO 4217 code is AFN. It is subdivided into 100 pul. It is issued by Da Afghanistan Bank.

Poetry is a big part of Afghans' culture and it has been for centuries. In the city of Herat, women, men and children gather on Thursday night to share verses from old and new poetry.

The government of Afghanistan is divided into three branches: executive, legislative, and judicial. It is an Islamic republic and is currently led by th Karzai administration. Hamid Karzai is the current President of Afghanistan. He has been the president since December 7, 2004. Mohammed Fahim is the first Vice President since November 2009. Karim Khalili is the current second Vice President in the Karzai administration. He assumed office on December 7,2004.

Afghanistan's national game is called Buzkashi, or in other words, goat-grabbing. It's a sport where the players in two teams try to catch a goat while riding on a horse. It has been played for centuries and it even got sponsors for it nowadays.

The capital of Afghanistan, Kabul, is the largest city of Afghanistan. It covers an area of 106.2 square miles and has an estimated population of 3,895,000.

Persian or Dari and Pashto are the official languages of Afghanistan. Other languages also spoken in the country are Uzbek, Turkmen, Balochi, Pashayi, and Nuristani.