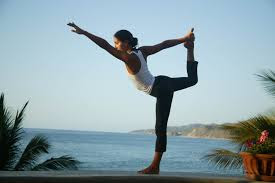 The word “yoga” is derived from the Sanskrit root yuj meaning to yoke or join together. It most often refers to the yoking of a conscious subject (jiva-atman) with a Supreme Spirit (parama ta man) in order to reach an ecstatic condition (Samadhi, a “placing or putting together”). It is derived from the Proto-Indo-European base *yeug-, meaning “to join” as in jugular.

A 2008 market study in Yoga Journal reports that some 16 million Americans practice yoga and spend $5.7 billion a year on gear.

“Doga” is a type of yoga in which people use yoga to achieve harmony with their pets. Dogs can either be used as props for their owners or they can do the stretches themselves. It reportedly started in New York in 2002 when Suzi Teitelman started “Yoga for Dogs.”

The swastika is a yoga symbol that comes from the Sanskrit term Svastik, meaning “that which is associated with well-being.”

The yoga symbol “Om” is found in Hindu and Tibetan philosophy. It is said to be the primordial sound of the universe and is connected to the Ajna Chakra (the conscience) or “third eye” region.

Aaron Star teaches “Hot Nude Yoga” in a Chelsea studio. The classes are men-only, and there are only two rules: “no kissing and no touching penises.”

A growing body of research shows that yoga can improve sex and may even prevent and treat sex problems by increasing the overall health of the cardiovascular system.

Pierre Bernard (1875-1955), also known as the “Omnipotent Oom,” was one of the first prolific American yogis. He founded the Tantrik Order, a secret society which taught its initiates Hatha yoga, philosophy, and Sanskrit and which also sanctioned sacramental sex.

Yoga has been called one of the first and most successful products of globalization.

Several scholars have noted that yoga had been packaged so well as a defense against illness and aging that it is “easy to lose sight of its real purpose—spiritual liberation.”

The lotus pose is a sitting pose meant to resemble the perfect symmetry and beauty of a lotus flower. Siddhartha Gautama, the founder of Buddhism, and Shiva, a major god in Hinduism, are typically shown in this pose.

Amid controversy, the Hindu American Foundation launched its “Take Back Yoga” campaign in late 2010 with the goal of making people more aware of yoga’s debt to Hindu. However, some scholars argue that yoga actually began in the Vedic culture of Indo-Europeans who settled in India around the third millennium B.C., long before Hindu began.

Patanjali (150 B.C.) was an Indian sage who recorded a series aphorism on how to practice yoga in the text Yoga Sutras. While Patanjali is typically considered the father of yoga, yoga was around long before Patanjali, who only made it more accessible.

Hindu leader Swami Vivekananda (1863-1902) is considered a key figure in introducing yoga into Western culture, and his address to the Parliament of Religions in Chicago in 1893 is said to have initiated yoga’s evolution in the West. The Beatles, especially George Harrison, also helped introduce yoga into the West. Additionally, the Beatles were the first to bring the sitar into rock and roll and the first to introduce Hindu melodies into modern music.

Scholars believe that yoga incorporated elements of Stone Age shamanism, which dates back to at least 25,000 B.C. Yoga assimilated such elements as shamanic poses, transcendence, asceticism, and illumination.

Swiss psychiatrist Carl Jung was one of the first Westerners to study yoga in depth. His comments on developing higher consciousness in the East helped introduce the West to yoga concepts and practices.

Yoga is defined as having eight branches or limbs. (Yama, Niyama, Asana, Pranayama, Pratyhara, Dharana, Dhyana, Samadhi). The third limb, “Asana,” refers to postures and poses that most people think of when they hear the word “yoga.”

Scholars believe that the Rig-Veda (“praise of knowledge”) is one of the oldest known texts in the world. Containing elements of yoga, its earliest hymns are believed to be over 4,000 years old.

Most scholars agree that even though yoga and Hinduism are closely related, and that yoga is within religion, it is not itself a religion. Yoga is more often considered a type of spirituality.

Frequent synonyms of yoga include yoga-vid (“knower of yoga”), yukta (“yoked one”), yoga-raj (“king of yoga”), or yogendra (from yoga and indra), meaning “lord.”

Research has suggested that yoga improves social and occupational functioning in schizophrenic patients.l
When Tara Guber proposed that a public elementary school in Aspen, Colorado, teach yoga in 2002, Christian fundamentalists and some secular parents argued that yoga’s Hindu roots conflicted with Christian teachings or that teaching it in schools violated the separation of church and state.

Exercise physiologist Fabio Comana argues that the extreme heat associated with hot yoga (Bikram Yoga) is dangerous. He argues that temperatures over 105° will “start to damage protein.”a
“Hot yoga,” or “Bikram yoga,” is under criticism from the larger yoga community for allegedly plagiarizing traditional Hatha yoga postures.

A York University study found that practicing yoga reduced physical and psychological symptoms of chronic pain in women with fibromyalgia.

In his “The Culture of Narcissism” (1979), Christopher Lasch lumps yoga together with oral sex as symptoms of “America’s weakening sense of self.”

There are over 100 different schools of yoga, including Hatha yoga, Raja yoga (“royal yoga”), Jnana yoga (“path of knowledge”), Bhakti yoga, Karma yoga, (“discipline of action”), and Bikram yoga. While each school of yoga has different practices, they have a unified goal: the state of pure bliss and oneness with the universe.

In 2008, a council of muftis in Malaysia banned yoga for Muslims. The believed that the Hindu elements of a standard 60-minute yoga class could “destroy the faith of Muslims.”

Lena Fokina from Russia caused controversy when a video of her surfaced on YouTube showing her swinging, tossing, and spinning a two-week-old baby in what she calls “baby yoga.”