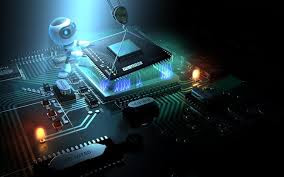 Technology is a fun topic that covers a wide range of interesting areas including the Internet, video games, computers, cell phones, robots and more. These technology facts are perfect you, the cool information will keep you interested as you learn some important ideas and concepts along the way.

Wikis, forums, and e-books are not a big priority for college students

The iPad is NOT the most preferred tablet on schools and universities.

Most students think wi-fi helps them get better grades and wouldn’t attend a school without it.

Women are roughly 20 percent of IT professionals.

Women receive less than 28 percent of the computer science bachelor's degrees, down from a high of 37 percent in 1984. Computer science is the only field in which women's participation has actually decreased over time.

RadioShack was one of the first companies to start the PC revolution in the mid 70′s with its TRS-80.

The first hard drive was made by IBM in 1956 and was called IBM Model 350 Disk File. The first-generation storage unit was huge, with a cabinet the size of a cupboard that held 50 24-inch disks and held an impressive 5MB of data.

Nearly 75% of tomorrow's jobs will require use of computers; fewer than 33% of participants in computer courses and related activities are girls.

Sixteen percent fewer girls than boys reported ever talking to their parents about science and technology issues.

A 1994 study of high school students found that the lack of knowledge of technological careers, the failure to connect what students were doing in class with future careers, and the lack of a sense of economic realities were particularly discouraging to girls, because they had less information about technology from experiences outside school.

Computers and computer games are marketed almost exclusively to boys, and even those games purportedly for both sexes, such as elementary math software, reflect sexist attitudes: only 12 percent of the characters in such games are female, even then they are generally portrayed as either a mother or a princess.

The Atari Portfolio was released in 1989 and was the world’s first palmtop computer. Two years later it appeared in the film Terminator 2, where it was used by John Connor to hack an ATM and retrieve the key to the vault in the Cyberdyne lab.

Claude Shannon, the “Father of information theory”, invented the digital circuit when he was only 21, during his master’s degree.

The images on a TV screen refresh fast enough to appear as smooth motion to the human eye.

Televisions first went on sale in the late 1920’s.

Early television was displayed in black and white.

Although the technology was developed earlier, color television sets didn’t become widespread until the 1970’s.

The 1980’s saw the arrival of remote controls.

Television sets are also used to watch DVD’s and Blu-ray discs, as well as play video games through the use of a console.

Video cassettes were used before DVD’s and Blu-ray discs but have been phased out in favor of new technology since the late 1990’s.

Did you know that the awesome sounding crack of a bullwhip in the air is a supersonic boom? The crack of the whip occurs when the sound barrier is broken.

Six astronauts have driven a lunar rover on the moon.

If you’ve ever wondered how fast the earth orbits through space, we travel at an average of about 67,000 miles per hour every day and night on earth.

The international space station is traveling at an astonishing 17,500 miles per hour.

Is it true Windmills all over the world go counterclockwise but the ones in Ireland go clockwise. It is true and that’s a fact.

It’s true, the match was invented after the cigarette lighter.

At least 1300 inventions were patented by Thomas Edison during his entire lifetime.

At the time of writing this in August 2012, the world has only fourteen operating blimps.

Watches and clocks are often times lubricated by jewelers with a pure silicone watch oil which can fetch a price of around $3,100 or more per gallon. It’s usually purchased in much smaller quantities.

The first patent for the life boat goes back to 1845.

The Apple II had a hard drive of only 5 megabytes when it was launched.

It may not sound very comfortable but Ancient Egyptians actually slept on hard pillows they called head rests made of stone pottery, wood and other uncomfortable materials.

Th AAA Motor Club and travel organization was created initially so that it could warn traveling motorists about police speed traps around the country.

The US uses more steel to create bottle caps than it does to make bodies for cars.

The Kleenex tissue was initially a filter for gas masks.

Nasa’s space station Skylab launched off in 1973 and crashed on earth in July 1979 in western Australia. The town of Esperance fined NASA $400.00 for littering. The fine was never paid.

The first coin operated video games were introduced in the 1970’s with titles such as ‘Computer Space’ and ‘Pong’ gaining popularity.

Popular game consoles that dominate current markets include the Nintendo Wii, Microsoft Xbox 360 and Sony Playstation 3. The three companies are battling to gain the attention of gamers in the competitive gaming industry.

Often seen as an industry leader and innovator, Nintendo have helped grow the video games industry beyond just hardcore gamers thank to games such as Nintendogs, Brain Training and Wii Sports, titles that take advantage of Nintendo’s unique gaming platforms and appeal to casual gamers.

In the past the primary input for video games has been the handheld controller, this has changed recently as game makers look to capture new audiences with new interactive input devices. Examples of this include cameras which respond to user movement, guitars, microphones, touch screens, motion sensitive controllers and more.