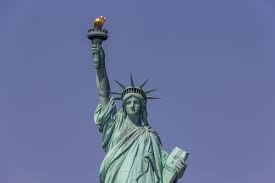 Total overall height from the base of the pedestal foundation to the tip of the torch is 305 feet, 6 inches.

Height of the Statue from her heel to the top of her head is 111 feet, 6 inches.

The face on the Statue of Liberty measures more than 8 feet tall.

There are 154 steps from the pedestal to the head of the Statue of Liberty.

The Statue has a 35-foot waistline.

There are seven rays on her crown, one for each of the seven continents, each measuring up to 9 feet in length and weighing as much as 150 pounds.

At the feet of the Statue lie broken shackles of oppression and tyranny.

During the restoration completed in 1986, the new torch was carefully covered with thin sheets of 24k gold.

The exterior copper covering of the Statue of Liberty is 3/32 of an inch thick (less than the thickness of two pennies) and the light green color (called a patina) is the result of natural weathering of the copper.

The Statue of Liberty is located on Liberty Island, in the New York harbor, USA.

The Statue of Liberty commemorates the American Declaration of Independence and was a gift from the people of France.

The statue was assembled on its pedestal after being constructed in France and sent to the US in crates.

The Statue of Liberty was designed by French sculptor Frederic Bartholdi.

The female form represented by the sculpture is based on Libertas, the Roman goddess of liberty. She holds a torch and a tabula ansata (tablet) that has the date of the American Declaration of Independence inscribed in it (July 4, 1776).

A broken chain also lies at the feet of the statue which is hard to see from the ground.

The official name of the Statue of Liberty is ‘Liberty Enlightening the World’.

The statue has been closed for renovation a number of times, including between 1984 and 1986 when the torch and much of the internal structure was replaced.

The head of the statue was displayed at the World's Fair in Paris, 1878.

There was difficulty in the United States finding money to fund the project, especially after a financial crisis in 1873. A fundraising drive led by newspaper publisher Joseph Pulitzer was embraced by New Yorkers and helped push work forward. 80% of the donations were of less than $1.

There are replicas of the Statue of Liberty found in Paris, Las Vegas and many other cities around the world.
Share This