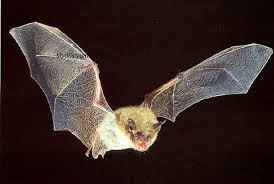 The Bracken Bat Cave in Texas is the largest known bat colony in the world. Over 20 million bats live in the cave, which is more bats than there are people living in Mumbai, India—one of the world’s largest human cities. When the bats leave the cave, the group is so large that it looks like a huge storm on radar. The bats will eat over 200 tons of bugs in one night.

A small colony of bats can eat over one ton of insects in one year, or more than 600 million bugs.

A single bat can eat more than 600 bugs in one hour, which is like a person eating 20 pizzas a night.

According to Bat Conservation International, 150 big brown bats can eat enough cucumber beetles in one summer to save farmers a billion dollars a year. Those beetles would have had 33 million larvae, which are what attack the crops.

There are over 1,100 bat species in the world—only rodents have a greater number of species. In the United States, there are about 45 kinds of bats; the three most common are the Eptiesicus fuscus (big brown bat), Myotis lucifugus (little brown bat), and Tadarida brasilienis (Mexican free-tailed bat). Only three species of bats are vampire bats.

In Southeast Asia, small club-footed bats roost inside bamboo stalks. To reach their home, the bats squeeze into an opening as small as 0.4 inches—about the width of a fingernail.

Some seeds will not sprout unless they have passed through the digestive tracts of a bat. Additionally, bats spread millions of seeds every year from the ripe fruit they eat. Approximately 95% of the reforestation of the tropical rainforest is a result of seed dispersal from bats.

Vampire bats do not actually “suck” blood. Instead, they typically “lap” up two teaspoons of blood a night with their tongues. The blood moves through the bat’s mouth in two channels under its tongue. Its body uses only red blood cells, and within two minutes of starting to eat, the bat’s body rids itself of blood plasma in the form of urine.

Some white-winged vampire bats snuggle up to hens and pretend to be chicks. Once in position under the hens, the bats feed on their blood.

Rarely will a vampire bat bite a person—but if it does, it will then probably come back the next night to feed again from that same person. Amazingly, vampire bats can tell people apart by the way they breathe.b
A vampire bat that has found a meal may sometimes share the blood with other hungry vampires at the vampire roost. The vampire that found the blood vomits it to feed its friends.

More than half of all bats in the U.S. are endangered or in decline. Both loss of habitat and a mysterious illness called “White-Nose Syndrome” (which has affected over a million bats) are major reasons for the decline.

The scientific name for bats, Chiroptera, is from the Greek cheir = hand + pteron = wing, or “hand wing.”c
Bats have variously been called “flutterers,” “bald mice,” “old batters,” “fleder mauser,” “slang bats,” and “vagabonds.” They have also been called “flitter mice” because people thought of them as flying mice.

There are two main groups of bats: larger, Old World, fruit-eating mega bats (Megachiroptera) and microbats (Microchiroptera). Megabats are also known as fruit bats or flying foxes and typically live in warm climates. They use their large eyes to find food in the dark and they tend to roost in trees rather than in caves, crevices, or old buildings. Microbats are generally much smaller and use echolocation to find insects. Microbats are typically found all over the world, including the U.S. Not all megabats are larger than microbats.

There are several differences between megabats and microbats. The megabat has two claws, one on its thumb and one on its next finger. Microbats only have one claw, on the thumb. Megabats have better developed brains than microbats and they also rely more on their senses (sight and smell) and less on echolocation. A roosting megabat will bend its neck toward its chest and look at the world upside down. A roosting microbat will bend its neck toward its back and look at the world right-side up.

Scientists believe that flight in bats developed before echolocation.

Bats are the only mammals capable of powered flights.

Bats live on every continent except Antarctica. They are found almost as far north as the Arctic Circle and as far south as Argentina and the southern-most tip of South Africa.

flying bat Bats are more efficient fliers than birds due to their multi-jointed wings
Unlike birds, which flap their entire forelimbs, bats flap their spread-out digits.

Bats make up about 20% of all classified mammal species globally.

Approximately 70% of bats eat insects. The rest are frugivores, or fruit eaters.

Bats are the slowest reproducing mammals in the world for their size, and pregnancy is longer in bats than in other animals of their size.

Vampire bats are the only bats that move well on the ground.

Many bats open their mouth to call out their ultrasound echolocation signals, but others can shout through their nostrils. A few other animals use echolocation, including dolphins and some cave-dwelling birds.

The mouse-eared bat has a heartbeat as low as 18 beats a minute during hibernation, compared to 880 when it is active.

In China and Japan, bats are symbols of happiness. In Chinese, the words for “bat” and “good fortune” are both pronounced “fu.”

In North America and Europe, bats have long been associated with witchcraft and were often ingredients in folk medicines and potions.

The story of Dracula originated in Eastern Europe; however, real vampire bats are found only in Central and South America.

Fruit bats are a traditional food source for the people of Guam and have been hunted to the point where bats are currently listed as endangered. Guam now imports bat meat from other islands and serves as a major trade center for bat meat.

Bat dropping is called guano and is an important fertilizer in many tropical regions because of its high levels of phosphorus and nitrogen.

Bats are not blind and, in fact, many bats can see quite well; some species can even detect ultraviolet light. They also have excellent echolocation, which means, contrary to urban legend, they would not get tangled in people’s hair.

The tube-lipped nectar bat (Anoura fistulata) has the longest tongue, relative to body length, of any mammal. The bat retracts its tongue into its rib cage when it’s not being used.f
Some female bats, especially those that hibernate, can control when they give birth by storing the male’s sperm inside their body, which delays fertilization, or by slowing the development of the embryo inside them.

The oldest known fossil microbat, called Icaronycteris index, was found near Yellowstone in Wyoming. It lived approximately 50 million years ago.

The bumblebee bat (Kitti’s Hog-nosed Bat) is the smallest bat in the world and lives in Thailand. Approximately the size of a bumblebee, the bat weighs less than a penny. It may be the smallest existing mammal. Due to habitant loss, it is listed as critically endangered.

Scientist have been able to use the anticoagulation agent in vampire bat spit to treat human stroke victims and human heart patient victims.

Most bats are brown and black, but a few are colorful shades of orange or red.

A bat’s echolocation is so tuned that it can detect objects as thin as a human hair.

A bat can detect the warmth of an animal 16 cm away using its “nose leaf.”