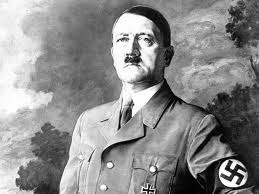 Historians note that Hitler’s regime is particularly chilling because it reveals how a modern, advanced, cultured society can rapidly sink into barbarity and genocide. In short, Hitler’s dictatorship reveals what we are capable of.

As it is their goal to do this for all people who have ever lived on the Earth, Mormons posthumously baptized and endowed Hitler in 1993. He was “sealed” to his parents on March 12, 1994. Both took place in England.

A recently opened clothing store in the Indian metropolis of Ahmedabad is named “Hitler.” A swastika dots the letter “i” in Hitler.

Hitler’s longest relationship was with Eva Braun (1912-1945). She tried to commit suicide twice in an attempt to garner more of Hitler’s attention.

Hitler was a gifted orator but had a raspy voice as a consequence of a gas attack he suffered during WWI.

When Hitler’s close associate Ernst Hanfstaengl told him that his short mustache was unfashionable, Hitler replied: “If it is not the fashion now, it will be because I wear it.”

Historians argue whether Hitler was a natural consequence of German history or an aberration of it.

Hitler and Eva Braun were married in 1945 and killed themselves 36 hours later. Braun was 33 years old. Hitler was 56.

In his last will and testament that he dictated to his secretary Traudl Junge (1920-2002), Hitler stated that “in spite of all set backs” the war “will one day go down in history as the most glorious and heroic manifestation of a people’s will to live.”

In 2009, DNA tests reveled that the skull fragment long thought to have been Hitler’s is that of an unknown woman under 40. Scientists don’t believe the skull belongs to Evan Braun because she committed suicide by cyanide rather than with a gun.d
Hitler’s unusual medical remedies included enemas and leeches.

The name “Adolph” means “noble wolf.” Hitler used the pseudonym Herr Wolf early in his career when he wanted to avoided recognition. He named his headquarters “Wolf’s Lair” and “Wolf’s Headquarters” and named his favorite German shepherd puppy “Wolf.”

Hitler never gained majority support in free elections. The most the National Socialist German Workers Party (NSDAP) garnered was 37.3% in July 1932. In 1933, when Hitler became Chancellor, the Nazis had only one third of the seats in the Reichstag.

Hitler’s father was married three times. First to a woman much older than himself, then to women who were young enough to be his daughters.

Klara Polzl (1860-1907) was Hitler’s mother and was the eldest of only three surviving children out of 11. Officially, Hitler’s father, Alois, and his mother were second cousins and needed government permission to marry.

Hitler was born on April 20, 1889, at half past six in the evening on an Easter Saturday in Braunau Am Inn, Austria.

It was significant to Hitler that he was born in a town on the very frontier of the Austrian and the German empires. Very early in his life he felt loyal to the Germans and rejected the multinational Hapsburg Empire.

Both of Hitler’s parents died before he was 19. His mother died of breast cancer in 1907, when he was 18 years old. His father died of pleural hemorrhage in 1903, when Hitler was 14 years old.

Dr. Bloch, the Jewish physician who cared for Hitler’s mother, noted that in nearly 50 years of his career as a doctor, he had never seen a young man as broken with grief as Adolf Hitler was at the death of his mother. He had carried her picture with him down to the last days in the bunker.

Hitler’s father was an authoritarian, overbearing, domineering husband and a stern, distant, masterful, and irritable father. Long after their marriage, Hitler’s mother Klara could not break the habit of calling him Uncle.

Hitler was imprisoned in 1923 when he participated in the Beer Hall Putsch, which was an attempt to overthrow the government. During his time in prison, he wrote his memoir, Mein Kampf (My Struggle).

The purpose of Hitler’s domestic and foreign polies was to accumulate more living space or “Lebensraum” for the German people.i
Hitler’s racism and supremacists policies led to the murder of 11 million people, which includes 6 million Jews. Overall, between 50-70 million died during WWII.

Hitler believed that Germany lost WWI because the German army was “stabbed in the back” on the home front by Marxists (“November Criminals”) and civilian leaders.

Hitler was the 4th of 6 children. His older siblings Gustav, Ida, and Otto died in infancy. His younger brother Edmund would die of the measles in 1900, when Hitler was 11. Only a sister, Paula, would survive to adulthood.

Contrary to his father’s wishes to become a civil servant, Hitler’s dream was to become an artist. However, he was rejected by the Academy of Fine Arts Vienna twice (1907, 1908).